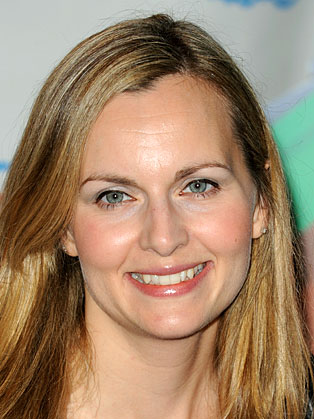 Debra Stephenson is an English actress and impressionist.

Debra Stephenson is an English actress, comedienne, impressionist and singer. She is best known for her roles on Playing the Field as Diane Powell, Bad Girls as Shell Dockley and Coronation Street as Frankie Baldwin.

At the age of 14, Stephenson appeared on BBC TV's Opportunity Knocks, winning her way through to the All-Winners' Final, broadcast live from the London Palladium. She appeared on Blue Peter doing an impression of Esther Rantzen; she also appeared in other CBBC programmes and was a backing singer on Chris Jarvis's 1997 charity single "Glasses".

Stephenson was then on TV screens in 1998 in Kay Mellor's comedy drama about women's football, Playing the Field. Stephenson also appeared in the last two episodes of ITV1's adaptation of Catherine Cookson's A Dinner of Herbs, in which she played the adult Kate Roystan, who fell in love with the son of the woman who murdered her grandfather.

In 1999, Stephenson had a more prominent role playing Shell Dockley in the ITV prison drama Bad Girls. Her performance as the psychotic Dockley earned her consecutive nominations for Best Actress at the National Television Awards in 1999 and 2000. After three years playing one of the show's most popular characters, Stephenson left in 2001, returning for one last time in 2003.

As well as doing stand-up comedy at venues including London's Comedy Store, Stephenson has played several roles as a comic actress on radio and television. These include Hosanna in the BBC Radio 4 comedy At Home with the Snails (2002), and sketch show TV to Go in 2000 with Hugh Dennis and Pauline McLynn. She featured in the 1998 Chucklevision episode "Stop that Stamp" as the Grand Duchess Olga. Stephenson was also part of The Friday Night Project, interviewing the public and going undercover with disguises such as 'Debbo'.

From June 2004 to December 2006, Stephenson starred in British soap opera Coronation Street playing Frankie Baldwin, the wife of Bradley Walsh's character, Danny. She received nominations for "Best Newcomer" at various TV and soap awards shows. On 14 May 2006, producers announced that Stephenson would be leaving the soap at the end of that year. Her final scenes aired on 31 December 2006.

In 2005, Stephenson took part in Comic Relief Does Fame Academy, a singing competition involving celebrities, to raise money for charity, and finished fifth. Among her performances was a rendition of "Cry Me a River" which was called "blemishless" and of Dionne Warwick's "Anyone Who Had a Heart". Her participation on the show led to a recording contract and she released her debut album, In The Sunshine including cover versions of the songs she sang on the show. Stephenson was a reporter for GMTV throughout 2007 as part of The Richard Arnold Show.

Stephenson appeared on Channel Virgin 1's The Prisoner:X in December 2008 where she was locked up for four days in a high security prison in America, where she spent a night in segregation and was treated as though she was an actual prisoner doing time in that prison. Stephenson played the part of Aladdin in the pantomime Aladdin at the Regent Theatre in Ipswich. The pantomime was shown on 13 December 2008 and performed again in January 2009. Because of this role, Stephenson appeared on the Celebrity Ding Dong Christmas special in which the theme was pantomimes and "goodies vs baddies". The goodies (Stephenson's team) won.

The Impressions Show with Culshaw and Stephenson, led by Stephenson and Jon Culshaw, began recording in August 2009. Co-starring as lead regulars are Thomas Nelstrop and newcomer impressionist Jess Robinson. Eight episodes were commissioned by the BBC; the first aired on Saturday 31 October 2009. The show was recommissioned for a second series in 2010 and then again for a third series of six episodes which started on 26 October 2011. As of October 2011, only the first series has currently been released on to DVD.

In March 2010, Stephenson took part in Let's Dance for Sport Relief and reached the final after a rendition of Michael Jackson's "Smooth Criminal". The judges chose to put her through to the final as she had received some of the highest viewer votes. The final was live on 13 March and she performed the same routine. The winner was Rufus Hound who performed a version of Cheryl Cole's "Fight For This Love". She is also a contestant on the 2011 Strictly Come Dancing Christmas special.

Stephenson was a guest for four episodes as Naomi Scotcher in Waterloo Road. In October 2012, Stephenson played the television cook, Fanny Cradock in Fanny and Friends on More4.

In 2015 she appeared alongside Ray Quinn in ITV's talent show Get Your Act Together. Beginning in April 2015 she voiced a number of characters in the ITV puppet sketch show Newzoids alongside Jon Culshaw.