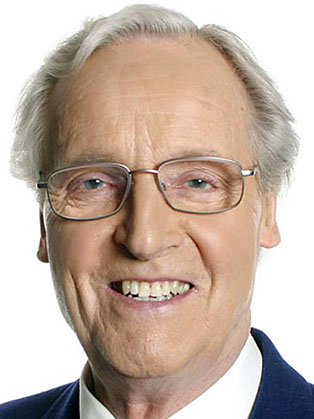 During is life Nicholas Parsons worked in every branch of show business and was a serious actor and a comedy performer, sadly passing away 28th January 2020.

Nicholas Parsons became a household name in Britain when he appeared as Straight Man to comedian Arthur Haynes in the early 60’s and their programmes were the top-rated comedy shows on Independent Television for ten years. He worked for three years with Benny Hill in his television shows. He was the Host of the amazingly successful SALE OF THE CENTURY for fourteen years. He has hosted the BBC Radio 4 comedy game show JUST A MINUTE for forty-five years. His starring roles in the West End include BOEING-BOEING, SAY WHO YOU ARE, UPROAR IN THE HOUSE, CHARLIE GIRL, Stephen Sondheim’s INTO THE WOODS and two London seasons and a national tour of the cult musical THE ROCKY HORROR SHOW. He is much in demand on cruise ships where he presents his solo comedy show and his cultural show devoted to the life and work of the great nonsense poet Edward Lear.

Nicholas Parsons began his working life as an engineering apprentice in the tough and harsh world of the Clydeside shipyards, where he worked for five years.  He went for a time to Glasgow University but gave up engineering to become an Actor.

His first job was as a Carroll Levis Discovery doing impersonations.  He worked for two years in repertory, playing every conceivable role.  Later he worked in the West End doing sophisticated cabaret, and then in variety, including six months as resident comedian at the famous Windmill theatre.  He did a lot of revues, was in MUCH BINDING IN THE MARSH, the Eric Barker shows, and then met up with Arthur Haynes and the partnership was formed that ran for 10 years and they became the top rated comedy show on ITV in the 60’s.  They also appeared in an amazing season at the London Palladium called SWING ALONG.  When the partnership broke up Nicholas worked for 3 years with Benny Hill in his television series.

In 1968 he was voted Radio Personality of the year for his satirical comedy show LISTEN TO THIS SPACE.  At the same time JUST A MINUTE began on Radio 4, and he is still hosting this comedy game show after 47 years.  He has appeared in feature roles in many British films, and one American film with Jerry Lewis.  He was in one series of Dr Who, THE CURSE OF FENRIC. He has worked consistently in the West End of London in various plays.  He starred for over a year in the comedy BOEING-BOEING, UPROAR IN THE HOUSE, SAY WHO YOU ARE, and latterly in a number of musicals CHARLIE GIRL, Stephen Sondheim’s INTO THE WOODS, and more recently in two London seasons and a national tour of the cult musical THE ROCKY HORROR SHOW.

He has starred in an American comedy series THE UGLIEST GIRL IN TOWN.  He has appeared regularly in pantomime, making a speciality in the role of dame.  He probably is best remembered by most people for the highly successful quiz show he hosted for a record 14 years, SALE OF THE CENTURY. He has performed his one man comedy show in many venues in this country, as well as comedy festivals abroad.  He has appeared at the Edinburgh Festival on 18 different occasions in 3 different shows.  He returns in 2014 to The Pleasance with his comedy chat show THE NICHOLAS PARSONS HAPPY HOUR.

His autobiography THE STRAIGHT MAN – MY LIFE IN COMEDY was published in 1994 and in 2010 he produced a book of memoirs – NICHOLAS PARSONS WITH JUST A TOUCH OF HESITATION, REPETITION AND DEVIATION which has been very well received.  He works actively for a number of children’s charities and is ex-President of The Lord’s Taverners.  He is an Ambassador for Childline and a Barker of the Variety Club.  He is a member of the Grand Order of Water Rats.  He has been honoured by St Andrews University with a Doctor of Laws in recognition of his work as Rector there for three years.  In 2003 he was given an OBE for services to the theatre and broadcasting and in 2013 he was honoured with a CBE for his work for charity.

Nicholas will be dearly missed.

AN EVENING WITH NICHOLAS PARSONS

A simple title for a wholly out of the ordinary event.

A show full of humour, comedy and acutely observed characterisations.

Nicholas Parsons demonstrates his unique ability as a solo performer and raconteur in this anecdotal entertainment based on his experience of life and working in the various media of an unpredictable and always fascinating profession.  His ability to laugh at himself and see the humour in his early life and struggles to be an actor, while serving an Engineering Apprenticeship in the harsh world of Clydeside, building to anecdotes based on his varied work in so many branches of show business, is a constant joy and a humorous revelation that keeps his audience continually enthralled.

JUST A LAUGH A MINUTE

This is a very entertaining and vibrant show, as Nicholas Parsons takes his audience on a humorous and nostalgic journey through the memorabilia of his long and eventful life, seeing the funny side of every situation as he highlights with superb and often hilarious observation those events that have shaped his career.  His early struggles to enter the difficult and unpredictable world of show business and to achieve something in that amazing and challenging world.  Also the stories of how he survived in the demanding and heady world of entertainment and achieved the position he now commands.