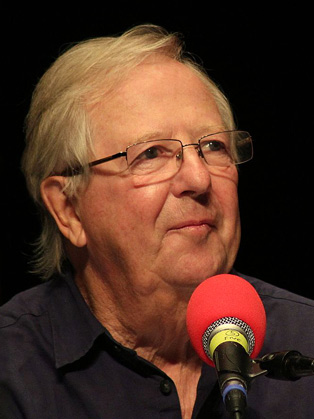 English comedian and actor Tim Brooke Taylor is best known for his work on the TV shows "At Last the 1948 Show " and "The Goodies".

Tim Brooke Taylor also acted as a panelist on the comedy game show "I'm Sorry I Haven't a Clue" for over 40 years.

Tim was born in Buxton, Derbyshire. His father was a solicitor, his mother a lacrosse international and his maternal grandfather a parson who played centre forward for England in the 1890s.

After a bad educational start - he was expelled from his first school at the age of five and a half - he went to various schools in Buxton and then onto Winchester College. Before going to Cambridge he taught at two private schools - one in Hemel Hempstead and the other, one of his old schools in Buxton, Holm Leigh - but only subjects he knew very little about.

In 1960 he began an economics and law degree course at Pembroke College, Cambridge and, as a result of a promise he made to the Derbyshire Education Committee in return for a grant, he joined the Footlights Revue Club. It was in the Footlights that he first met, wrote and performed with Bill Oddie, Graeme Garden, John Cleese, Graham Chapman, Eric Idle and Trevor Nunn and others.

The Footlights revue of 1963, Cambridge Circus, transferred to London and then, via New Zealand, to Broadway. The cast returned to England where they made several radio series of I'm Sorry I'll Read That Again. Its successor, a relatively unscripted show I'm Sorry I Haven't a Clue, is still running 37 years after its beginnings in 1972.

Tim has recently been touring with a stage version of the show hosted by Jack Dee.

He has appeared in many television and radio shows, but will probably always be best known as a 'Goody'. The triumvirate of Tim, Bill Oddie and Graeme Garden made nearly 80 episodes of The Goodies for BBC Television. He and Graeme, with Bill on video, have staged two highly successful Goodies stage shows in Australia in 2005, a run at the Edinburgh Festival in 2006 and a UK tour in 2007. Tim and Graeme also appeared as Goodies at a comedy festival in Sydney in October 2009. Three very reasonably priced Goodies DVDs are currently available. The Goodies also produced several best-selling books and records. Who can forget 'Funky Gibbon' - well, we can try.

Tim has continued to work on radio and television and recently appeared as a mad chaplain in the sitcom TLC, Absolute Power and as a dodgy lawyer in Heartbeat and a soon-to-be-dead doctor in Marple.