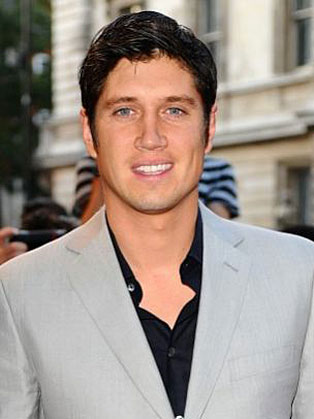 Vernon Kay is best known as a presenter of shows such as All Star Family Fortunes and Splash!

Vernon Kay is an English television presenter, radio DJ and former model best known for his television roles with ITV, presenting shows such as All Star Family Fortunes, Beat the Star and Splash!

Vernon Kay first burst onto our TV screens on T4 in 2000 and has been a permanent feature ever since.

Hailing from Bolton, Vernon’s first taste of fame came when he was spotted by a model scout from Select at the BBC’s Clothes Show Live. He began a successful modelling career but it was not long before he was picked out for stardom by Channel 4 when he won ‘Model of the Week’ on The Big Breakfast.

In 2000 Vernon landed a regular gig on Channel 4’s T4. This proved to be the perfect vehicle to show off his humour and warmth as a presenter. Vernon was with T4 until 2006 and during that time his love of music shone through as he became a presenter for BBC2’s Top of the Pops Plus, and the spin off series Top of the Pops @ Play for Play UK.

Vernon joined Radio 1 in 2006 & has been a regular on the station ever since hosting, not only his regular weekend show, but also filling in for some of the weekday DJs. He can currently be found from 10-1pm on Saturdays playing the best new music around and some classics for good measure.

Vernon whilst presenting Hit Me Baby One More Time for ITV1, such was its success the major US network NBC asked Vernon to host the US version of the show were it was a number one hit for a number of weeks.

Other shows that Vernon has hosted include: Boys and Girls; Celebrities Under Pressure; FBI; T in the Park; The Grill; Wife for William; Head Jam.

During 2007, Vernon hosted a variety of shows for both BBC1 and ITV1 – he started the year by co-hosting the live celebrity singing show Just the Two of Us working alongside his wife, Tess Daly. In the spring, he took over as the host of ITV1 hit show Vernon Kay’s Gameshow Marathon. Being a massive fan of Elvis, he jumped at the chance of spending his summer travelling the globe attempting to find The World’s Greatest Elvis.

In 2010, Vernon got the chance of a life time when he was asked to be the host for quiz show Million Dollar Mind Game for the US Network ABC. Such was his success with the network that he was then asked to host Skating with the Stars, the ice-skating spin off to the huge US hit, Dancing with the Stars.