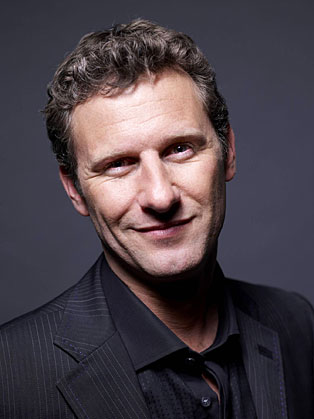 Adam Hills is an Australian comedian and television presenter.

Adam Hills has appeared on Australian and British television and is best known in Australia for his role hosting the music trivia show Spicks and Specks.

Spicks and Specks was ABC TVs highest rating program for seven years and the anchor for its highly successful Wednesday night comedy line up. In 2011, Spicks and Specks finished up on a high note after 7 years and 277 episodes. In 2012 Adam, Alan and Myf embarked on a huge national farewell tour of Spicks and Specktacular, performing to more than 80,000 fans around the country.

In 2012 Adam hosted a special panel show for the London Paralympics for Channel Four. The show was so well received that it was reprised for a Christmas special and was picked up for a full series which premiered on Channel Four in February 2013. This saw Adam hold the rare honour of hosting his own show in two separate countries.

Adam was given the rare honour of delivering Channel Four’s Alternative Christmas message in 2012 – adding his name to a list that includes Marge Simpson, Jamie Oliver and Brigitte Bardot.

In 2013 he was also part of the Channel 4 Gala line up at The O2 Arena, flying in to London from Melbourne for a mere few hours to make the event.

When Adam isn’t dominating the global TV landscape, he is usually somewhere in the world with a mic in hand doing his day job – globetrotting stand up comedian.

Adam has conquered Edinburgh and featured in more Montreal festivals than any other Australian. In 2013 he toured Australia and the UK with his new show Happyism, including a show at the iconic Hammersmith Apollo in September.

In amongst this he’s won a prestigious Helpmann Award, released three best selling stand up DVDs,had his own one hour stand up special on ABC TV and UK’s Channel 4 and has performed to the Queen.