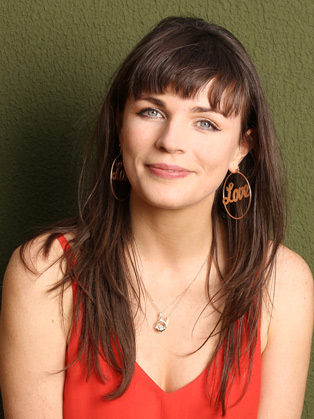 Aisling Bea is an award-winning stand-up comedian, writer and actor.

Since winning prestigious comedy competition So You Think You’re Funny? in 2012, Aisling Bea has become one of the most in-demand performers in UK and Irish comedy, a status cemented when she won the British Comedy Award for Best Female TV Comic in 2014.

In 2013 Aisling Bea was nominated for the Fosters Comedy Award for Best Newcomer for her debut Edinburgh show C’est La Bea, which received a plethora of 4 and 5 star reviews in its sold out run. Her second Edinburgh hour, 2015’s Plan Bea, was also a major hit, selling out its entire run before the festival had even started.

As well as her live work, Aisling has been fast establishing herself as a regular face on television. 2016 saw her return to More4’s 8 Out Of 10 Cats in her new role of team captain. She has performed stand-up on BBC 1’s Live At The Apollo, BBC 3’s Russell Howard’s Good News and Channel 4’s Comedy Gala. She has also appeared regularly on panel shows such as Channel 4’s 8 Out Of 10 Cats Does Countdown, BBC1’s Would I Lie To You and BBC2’s QI. In 2015 she was part of the team for Channel 4’s Alternative Election Night alongside David Mitchell and Jeremy Paxman, which aired live throughout the election results.

Aisling is also an accomplished LAMDA trained actress with recurring lead roles in both dramas and comedies such as Sky 1’s sitcom Trollied, ITV1’s The Delivery Man (currently on Netflix), Channel 4’s sketch show Cardinal Burns and BBC3’s Dead Boss. In 2016 she starred alongside Gillian Anderson in Series 3 of award-winning BBC2 crime drama The Fall. In 2017 Aisling appeared in new Channel 4 sitcom Gap Year and stars in BBC One drama Hard Sun, aired in January 2018.

A talented writer, Aisling is currently developing a Channel 4 commissioned scripted project with Sharon Horgan and Merman Films. She is also developing a show with Brona C Titley for Baby Cow Productions. She has had script and treatment commissions for films and TV shows with Grand Pictures, Big Talk and Citrus Productions. In 2013 she co-created and co-wrote the Chortle Award-nominated Radio 4 show Irish Micks and Legends, which returned for its second series in 2015.

Jeremy gave an informative and engaging presentation at our annual real estate conference considering the impact of AI and robotics, and how this might impact the future of work, logistics, healthcare and many other key areas in our industry.

James Reed, Chairman of the Reed Group of Companies

Jeremy gave our research team an insightful and engaging talk on innovation - not just in areas directly relevant to Danone and its core business, but also detailing developments in other fields, that built a coherent picture of how the technology landscape as a whole is changing every industry right now.