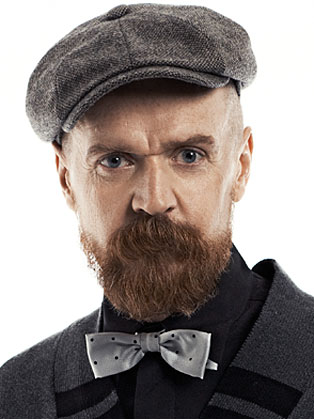 Alexander Bard s the author of the globally successful The Futurica Trilogy - co-written with media theorist Jan Söderqvist, and so far translated to over 20 languages - consisting of The Netocrats (originally published in 2002), The Global Empire (2004) and The Body Machines (2009). October 2014 sees the release of Bard’s fourth book with Söderqvist: Syntheism - Creating God in The Internet Age, in which the authors set out to construct a complete new metaphysical system for the digital age, covering everything from the inner existential truths of the new physics to the radical utopian potential of participatory culture.

Bard studied Economic Geography at The Stockholm School of Economics in the 1980s while building a highly successful international career as a songwriter and record producer. In 1992, he and his business partner Ola Håkansson co-founded Stockholm Records - which quickly achieved global success with bands like The Cardigans, A-Teens, and Bard’s own Army Of Lovers - which went on to become Scandinavia's biggest independent record company before it was sold to Universal Music in 1998. Even though he has claimed to be too busy with cyberphilosophy and political and spiritual activism to find the time for any more songwriting, Bard achieved No 1 hit records in Europe, Asia and North America as late as 2014. Never afraid of himself entering the stages on which he builds his groundbreaking theories, Bard has become (in)famous for his controversial television performances as a flamboyant star judge on Swedish Idol.

Bard has given lectures on the philosophical, sociological, and economic implications of the Internet revolution at the Stockholm School of Economics and other academic institutions worldwide since the late 1990s. Throughout his career, he has been a fundamental force in creating the Swedish music export sensation - making Sweden the world's biggest per capita music exporter - and promoting a deeper understanding of the full dramatic effects of the information technology revolution (Sweden being the home of both The Pirate Movement and music streaming giant Spotify).

Among the topics Bard speaks on are: