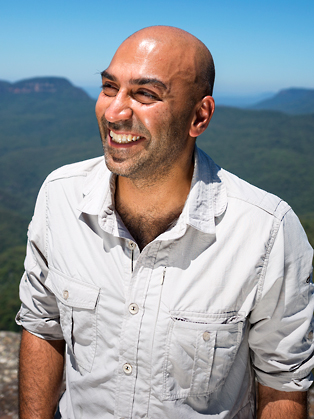 Amar Latif is a blind traveller, entrepreneur and TV personality with an astonishing track record of facing up to major challenges.

Amar became known to millions through the groundbreaking BBC2 reality show ‘Beyond Boundaries’ (series 1), and despite losing 95% of his sight by the age of 18, through determination, he managed to turn an unpromising loss into a truly inspirational achievement.

Amar Latif is a blind traveller, entrepreneur and TV personality with an astonishing track record of facing up to major challenges. Due to an incurable eye condition, Amar lost 95% of his sight by the age of 18, but through sheer determination, he has managed to turn an unpromising tale of loss, into one of truly inspirational achievement.

Millions through the BBC2 reality series ‘Beyond Boundaries’, a jungle endurance expedition across Central America, came to know Amar. Screened worldwide, it was a grueling 220-mile trek on foot across the rugged interior of Nicaragua, from the Atlantic to the Pacific coast. Amar had to ford swollen rivers, cut through dense jungle, cross waterfalls, climb a 5,000 ft. active volcano and navigate the second largest lake in Latin America.

In 2004, Amar founded Traveleyes, the world’s first commercial tour operator to specialize in holidays for blind as well as sighted travellers. Traveleyes has opened the holiday travel industry to millions of blind and partially sighted people around the world, giving them the opportunity to walk with lions in Africa to sailing the Ionian Sea and skiing down Europe’s highest mountains. Amar continues to lead many of these group explorations himself; uncovering the countless wonders that world travel offers the senses.

For his entrepreneurial achievements, Amar received The Outstanding Young Person of the World Accolade (Business / Entrepreneurial category) from the Chamber of Commerce International (JCI) and the prestigious Stelios Disabled Entrepreneur Award, presented by Sir Stelios Haji-Ioannou.

Amar’s inspirational public speaking engagements for major organisations and charities have included key speeches to: The United Nations (Ethiopia), German University of Technology (Oman), The Arabian Travel Market (Dubai), The NHS, HSBC, The Royal College of Art and The Royal National Institute for the Blind (London).

He is incredibly inspirational, especially from someone with such a disability, the way that he has never let it hold him back. Don’t think there was anybody in here today that wasn’t inspired by what he has achieved.
To say it was inspiring doesn’t do Amar justice. Not only did he bring to life some of the challenges he ahs faced and the accessibility pitfalls many organisations fall into but did so with such humour and charisma that his audience was totally won over. The feedback from my colleagues has been really positive, many of whom felt Amar’s interview was the highlight of the day.
Amar was a charming and enigmatic speaker, who drew the whole crows into his story with ease. He has a unique way of sharing his experiences as a visually impaired person; from education and banking, to setting up his own business, and all the challenges in-between. He made us laugh, but more importantly, he made us think