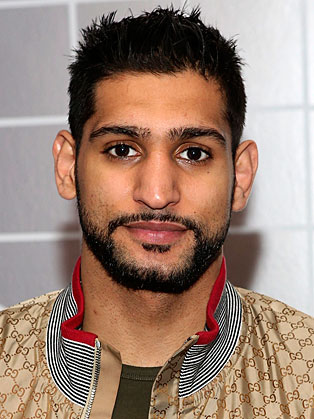 Amir is a world class boxer and Olympic silver medalist.

Amir Khan is one of the most talented sportsmen of his generation. Catapulted into the limelight from the 2004 Silver medal Olympic podium, Amir has become Britain's highest-profile boxer racking up an impressive professional fight record; having become the World Light Welterweight Champion in July 2009 after his life changing fight against Andreas Kotelnik.

Catapulted into the limelight from the 2004 Silver medal Olympic podium Amir Khan has become Britain's highest-profile boxer racking up an impressive professional fight record; having become the World Light Welterweight Champion in July 2009 after his life changing fight against Andreas Kotelnik.

Over the past four years Amir has ridden high at the top of his game to a rapturous reception in Britain, State-side and beyond. Sensationally losing for the first time in his professional career to Columbian bruiser Breidis Prescott in September 2008 - the tempest of conjecture and condemnation fuelled media frenzy was followed in quick succession by a gruelling and inspirational new training regime in L.A.

The boy from Bolton came back to the ring with brutal vengeance as he sent Oisin Fagan flailing to the floor in December 2008. Khan did not just convincingly put the boy down for a compelling victory - he exuded a fresh, calm, persona; a measured aggressor spearing his prey with a jab as he circled, finding his target and then unleashing a flurry of blows, taking him apart and sending him to the floor twice inside the first round… 97 seconds into the second it was all over.

Khan's World Title Fight in July 2009 with Kotelnik was an extremely intense match. Both were on top form but it was Khan’s display of speed, stamina and boxing skill that saw him victorious.

Living to box has been a self-proclaimed obsession for Amir Khan; one that has turned him from a talented streetwise boy, into a self-assured man and not forgetting to mention, World Champion.

If you were to ask anyone about Amir Khan's talent, they would undoubtedly say he was born to be a boxer. His calm exterior unnerving to his opponents; his craving to win making him faster and stronger than others; these are but a few reasons why he has become not only a winner, but an icon.

The fight between Amir Khan and Andreas Kotelnik did not start of as expected. Due to an unfortunate injury, Kotelnik had to postpone the fight until July 18th, subsequently delaying Amir Khan from holding the World Light Welterweight Champion title by just under a month.

There was a distinct buzz on the night of the match. Everyone who attended the fight or watched it on television could tell that this fight would be a defining moment for Khan. 12 rounds later and that moment arrived, propelling the Bolton Boxer to staggering new heights in his career.