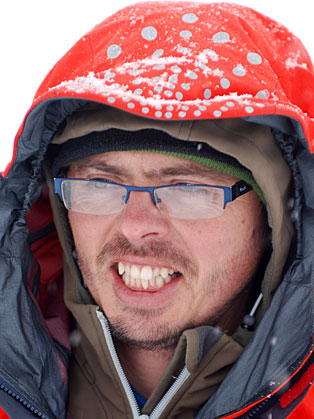 Andrew Kirkpatrick, usually known as Andy Kirkpatrick, is known as one of the UK's toughest mountaineers, as well as an award winning author, motivational speaker and monologist.

Andrew Kirkpatrick’s speciality is big wall climbing and winter expeditions, which involves pitting himself against a vertical climbs of over 1000 meters often in temperatures as low as minus 30 degrees. Andy has scaled Yosemite's El Capitan - one of the hardest walls in America - over twenty four times, including three solo ascents and a one day ascent (18h), as well as climbing it with a paraplegic climber, his thirteen year old daughter and a blind friend. One of these ascents was a 12 day solo of the Reticent Wall, viewed at the time as perhaps the hardest climb of its type in the world, and the subject of his award winning book Psychovertical.

In 2002 Andy undertook one of the hardest climbs in Europe: a 15 day winter ascent of the West face of the Dru. This 1000 metre pillar pushed him and his partner to their limits and was featured in the award winning film 'Cold Haul'.

In 2014 Andy made the first ascent of the South Ridge of Ulvertanna, Antarctica, viewed by climbers as the 'hardest mountain in the world' - spending 14 days at minus thirty and colder to reach the top. One month later, battling frostbitten toes, Andy lead the TV presenter Alex Jones up Moonlight Buttress in Zion for Sports Relief, raising £1.5 million pounds.

Andy has also taken part in many expeditions, including four winter expeditions to Patagonia, a crossing of Greenland, first ascents in Antarctica, and to many nights spent suffering to mention. The stories that Andy has brought back from these expeditions have become modern classics in the climbing world and have brought new meaning to the words 'epic' and 'cold'.

It is perhaps Andy's journey from remedial student to successful climber, writer and speaker that interests his audience most. Brought up on a council estate in one of Britain's flattest cities, Hull-born Andy suffered from severe dyslexia which went undiagnosed until he was 19. One of his greatest strengths is his ability to talk about his life and his climbs in a way that is totally accessible to the non-climber and allows the audience to experience the risk and tension of big wall climbing.

Andy also works in film and TV, as a stunt safety advisor and this plays a part in many of his talks, which take you from the heights of Patagonia to the chocolaty depths of Charlie and the Chocolate factory!