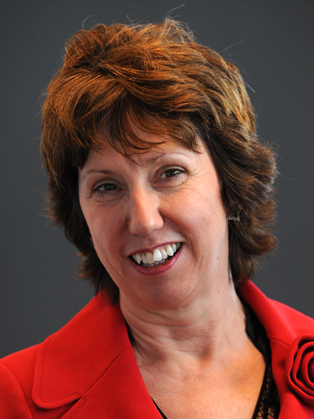 Catherine is the European Unions’s first High Representative of the Union for Foreign Affairs and Security Policy/Vice-President of the European Commission.

Catherine has been appointed as High Representative of the Union for Foreign Affairs and Security Policy. Catherine has been European Commissioner for Trade since October 2008. During her time as Trade Commissioner she has initiated an ambitious and far-reaching free trade agreement with South Korea, and solved a number of high-profile trade disputes with major trading partners. She has also championed trade as a means of promoting development around the world, putting the EU's economic relationship with African, Caribbean and Pacific countries on a firmer footing.

In November 2009 Catherine Ashton was appointed as the EU’s first High Representative of the Union for Foreign Affairs and Security Policy/Vice-President of the European Commission.

This new position was created under the Lisbon Treaty and the holder is charged with coordinating the EU's  Common foreign and security policy. The post combines previously separate roles – to make EU foreign policy more consistent and coherent.

The High Representative/Vice-President is supported in her work by the European External Action (EEAS), formed on 1 January 2011 by merging Commission and Council foreign policy departments and bringing in diplomats from national diplomatic services.

In May 2012, Catherine Ashton was honoured with the BusinessMed Blue Award. The award was presented to her in recognition of her efforts in promoting peace and economic development in the Mediterranean region. The Blue award – also known as “Mare Nostrum” - is a prize awarded each year to a personality selected by the Union of Mediterranean Confederations of Enterprises.

As EU Foreign Affairs chief her portfolio includes a wide variety of roles: traditional diplomacy; coordinating other foreign policy tools  – development assistance, trade, humanitarian aid and crisis response; building consensus between the 27 EU countries and their respective priorities – often through monthly meetings of EU foreign ministers – which she chairs; attending regular meetings of leaders of EU countries in the European Council; representing the EU at international fora such as the United Nations; heading the European Defence Agency and the EU Institute for Security Studies.

Prior to taking up her current position, Catherine Ashton was the member of the Commission responsible for trade.

She led major negotiations on the Free Trade Agreement with Korea, finalised in October 2009, and solved a number of high-profile trade disputes with major trading partners.  She also championed trade as a means of promoting development around the world, putting the EU's economic relationship with African, Caribbean and Pacific countries on a firmer footing.

Catherine Ashton also represented the EU in the Doha Round of world trade talks and built on strong bilateral trade and investment relationships.

In June 2001 she was appointed Parliamentary Under-Secretary of State in the Department of Education and Skills. In 2002 she was made responsible for the "Sure Start" initiative in the same department.

In September 2004, Mrs Ashton was appointed Parliamentary Under-Secretary in the Department for Constitutional Affairs.

In June 2007 Catherine Ashton was appointed to the Cabinet of the British Labour Government as Leader of the upper Parliamentary chamber, the House of Lords.

She attended Upholland Grammar School in Billinge Higher End, Lancashire, then Wigan Mining and Technical College. Ashton then went on to study in Bedford College, London. She graduated with a BSc in Sociology in 1977.

Catherine Ashton was born in Lancashire, England on 20 March 1956, she is married and has two children and three stepchildren.