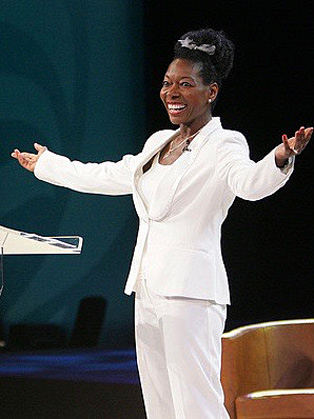 Baroness Floella Benjamin OBE is a Trinidadian-British actress, author, television presenter, singer, businesswoman and politician. She is known as presenter of children's programmes such as Play School, Play Away and Fast Forward.

Baroness Floella Benjamin was born in Trinidad in 1949 and came to England as a 10 year old child in 1960. She left school at 16 with the aim of becoming Britain's first ever black woman bank manager, but changed direction and became an actress, presenter, writer, independent producer, working peer and an active advocate for the welfare, care and education of children throughout the world. She has also headed a successful film and television production company for the last 28 years.

Baroness Floella Benjamin has been in show business for over 45 years and has appeared on stage, film, radio and television, working with leading directors, writers and producers. Her broadcasting work has been recognised with numerous awards, including an OBE in 2000, a Special Lifetime Achievement BAFTA Award in 2005 and the J.M Barrie Lifetime Award in 2012 for her lasting cultural legacy. In 2013 she was made a Fellow of the Shakespeare Birthplace Trust and in 2016 promoted their Shakespeare in Schools initiative which reach over one million school children.

She has written over 30 books including ‘Coming to England’, which is used as a resource in schools in social and cross-curricular areas. The book was adapted into a Royal Television Society award winning film by her production company for the BBC.

For 10 years she was the Chancellor of the University of Exeter, the first black woman university chancellor in the UK. She stepped down in 2016 and a statue was erected in her honour to commemorate her chancellorship.  She has recently been appointed President of the Society of Women Writers & Journalists. She is an RHS Ambassador, a Vice-President of the children’s charity Barnardo's and a Deputy Lieutenant of Greater London, representing Her Majesty the Queen.

She was elevated to the House of Lords as a life peer in 2010, the first Trinidadian woman to be ennobled. In Parliament she leads on children’s issues as well as education, media and diversity matters. She co-chairs two All Party Parliamentary Groups - APPG on A Fit & Healthy Childhood and APPG Children’ Media & the Arts. Both APPG’s have succeeded in influencing Government policy on several occasions, including changes made to child performance regulations, children programme and animation tax credits, as well as on obesity issues.

She led a 20-year campaign to create the role of Minister for Children, which achieved its goal in 2003. She continues to lead a nationwide campaign to save UK-made children's television programmes, as well as for the protection of children from accessing online pornography. She is also leading on the campaign to unfreeze UK frozen pensions.

She recently successfully fought for an amendment to the Digital Economy Bill to get more UK produced Children’s Programmes. She has recently introduced a Private Members’ Bill which addresses child loss from stillbirth and miscarriage.

She was Chairman of the prestigious Women of the Year Lunch for five years, Chairman of BAFTA-Television - where she created the Kids’ BAFTA Awards, a member of the Content Board of the broadcasting regulator OFCOM and a Millennium Commissioner. She was also Chair of Governors of the Isle of Sheppey Academy and a Governor of Dulwich College for 10 years.

She was also President of the Elizabeth 'R' Commonwealth Broadcasting Fund, a Governor of the National Film & Television School and a member of the Royal Mail Stamp Advisory Committee. She has also been a trustee and patron of numerous charities.

She created 'Touching Success', an initiative that aims to mentor and help young people, especially those from disadvantaged backgrounds, to excel. She is a motivational and inspirational speaker and lectures at schools, universities and organisations across the world.

In 2010 Floella completed her 10th consecutive London Marathon and the Great North Run for a second time, raising thousands of pounds for children's charity Barnardo's.

She is married to Keith and they have two children, a daughter Alvina, who is a teacher and a son Aston, who is a lawyer.

Her hobbies are photography, singing, travelling and making the world a better place for children!