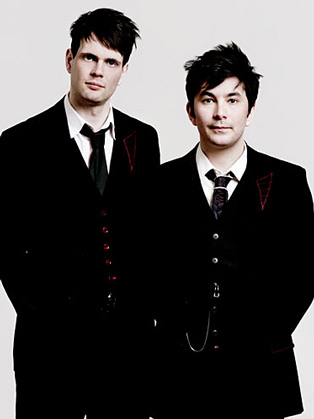 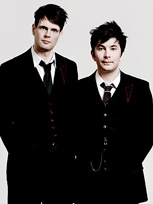 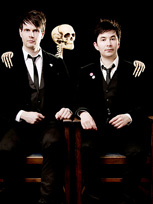 Barry and Stuart are Scottish magicians.

Barry and Stuart are two Scottish BAFTA nominated magicians and winners of the ITV show "The Next Great Magician."   Their multi award-winning mix of dark humour and subversive, mind-bending magic has been seen on television and on stage around the world.

The double act are known for their comically dark performing style, for taking as inspiration the accounts of biblical miracles and faking paranormal phenomena to form the basis for some of their illusions.

Dirty Tricks was a six-part series hosted by Jones and MacLeod. It was described as "magic meets Natural Born Killers."

At the end of every show, the presenters "killed" the radio and TV presenter Neil Fox in a horrific and painful manner. These included him being cremated, stabbed and crushed.

Tricks from the Bible

The duo drew inspiration from the miracle accounts in the Old Testament. Barry and Stuart performed illusions such as turning staffs into snakes in Egypt, exactly where it was said to be performed in the Old Testemant, casting some of the plagues of Egypt on two fans in an enclosed part of a restaurant, a transformation into a pillar of salt, exorcism of a demon and robbing a man of his strength as Samson had.

The Magicians is a BBC primetime show, that aired its first series during January 2011. It featured Barry and Stuart alongside host Lenny Henry. The show returned for its second series on 7 January 2012, with Barry and Stuart being the only personalities retained from series one. This second series was broadcast live and was the first magic series to do so in the UK in 30 years.

In December 2013 Barry and Stuart's latest show, "The Happenings" a four x 60 min series debuted in the UK. The duo went undercover as they set about making the unbelievable paranormal-like events believable to the unsuspecting residents of towns across the UK and America. Each episode was a self-contained narrative and featured their magic and illusion under the guise of mysterious incidents that were played out over the course of a few weeks in four different towns. Episodes featured, ghosts, vampires, aliens and government cover-ups.