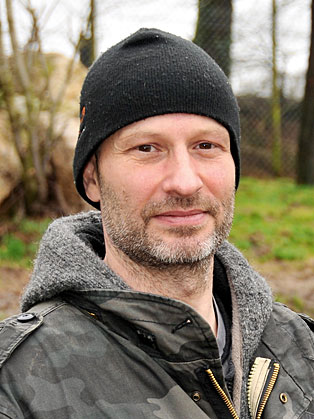 Benjamin is best known for his book and movie "We Bought A Zoo."

Zoo Director, journalist, and author Benjamin Mee is the man behind bestselling book and Hollywood movie "We Bought A Zoo". His inspirational story is of one man's leap of faith, triumphing over personal tragedy, and the battle to succeed, whatever obstacles stand in the way.

After a turbulent relationship with the education system in his youth, Benjamin started work as a bricklayer and decorator. He then became fascinated with the field of animal intelligence and never looked back. He decided to study Psychology at UCL before completing an MSc in Science Journalism at Imperial College.

Ben became a contributing editor to Men's Health magazine and a Guardian columnist before moving to Southern France where he began writing a book on the Evolution of Humour in Man and Animals. Then his sister sent him a sales brochure for Dartmoor Zoo with a note on it saying "Your dream scenario!", and everything changed. He and his family bought a zoo.

To make a challenge even more difficult, in the midst of dealing with escaping jaguars and troublesome adolescent vervet monkeys, Ben’s wife Katherine, who had developed, and had removed, a brain tumour while they were in France, began to experience symptoms again. The prognosis was poor, and so Ben found himself juggling the complexities of managing a zoo and getting it ready for re-opening while facing the consequences of his wife's terminal illness and caring for their two young children.

Ben′s story is one that both moves and entertains - charting simultaneously the family′s attempts to improve the animals′ lives, the build-up to the Zoo′s official reopening in 2007, as well as Katherine′s decline, her final days, and how the family went on in the face of many obstacles.

Ben’s book, We Bought A Zoo, is the full-length version of the above. It is an international bestseller and has been printed in 23 countries. Dartmoor Zoo also became the subject of a BBC2 four-part documentary called “Ben’s Zoo”. Small wonder then that Hollywood came calling.  And it doesn’t get much bigger than 20th Century Fox film studios backing a movie with Cameron Crowe (Jerry Maguire) as the director, with Matt Damon and Scarlett Johansson in the leading roles.

Dartmoor Zoological Park, Sparkwell, Nr. Plymouth in Devon, remains open today, still owned by the Mee’s. Benjamin continues to run it and raises his two children on site. He has many projects on the go, including writing four books and expanding the Zoo. He has television projects in development and travels the world conducting speaking and fund-raising tours, visiting zoos and investigating animal intelligence. In amongst all this he continues to educate, following his passion for transforming lives through knowledge, collaboration and partnership, and encouraging sustainability through shared practice in the context of conservation. He has been awarded an honorary science doctorate from Plymouth University in recognition of his work and passion for research and the communication of science.