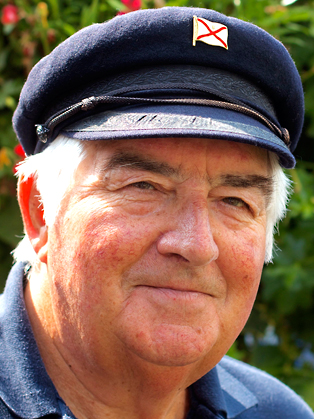 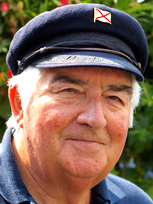 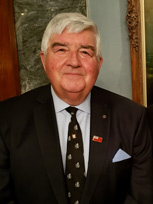 A light hearted but informative view of life as seen through a Mariner’s eye.

Captain Brian Nibbs draws upon his several years’ experience of a sea-going career and his marine-related experiences in positions ashore. His talk is specifically tailored to the audience and is interspersed with maritime anecdotes and memories.

Captain Brian Nibbs is a former Harbour Master and CEO of Jersey Harbours, a Younger Brother of Trinity House and a Trustee of Channel Islands Airsearch. He is a retired Royal Naval Reserve officer with some 30 years service and holds the Reserve Decoration and bar

Brian ‘went to sea in the ‘60’s’, perhaps the most important decade of the UK’s Merchant Navy, when its fleet was at its largest. He served with Ellerman Lines from Deck Officer Cadet to Chief Officer on world-wide routes, his favourite memories being of the South African route on a passenger liner – the City of Durban – and the MANZ run (Montreal, Australia and New Zealand) on the City of Auckland.

Following his 12 year deep-sea career, Brian spent two years on cross-channel ro/ro ferries and then a further two years in the City as a Marine Claims Adjuster.

Returning to Jersey, Brian joined Jersey Harbours as Marine Operations Officer after a short spell as Master of a Jersey based ro/ro ferry on inter-Island and continental routes. He acted as Oil Pollution Officer for Jersey at the time (March 1978) when the tanker Amoco Cadiz was wrecked on the adjacent French coast, a steep but positive learning curve, which resulted in him being sent to Ashridge Management College, which proved a benefit as he rose up the management tree.

After 12 years at Jersey Harbours and seeing no prospect of further promotion, he was engaged by Huelin Renouf Shipping as Operations Director, overseeing port, inland transport and seagoing activity in Jersey, Guernsey and Portsmouth. Much to his surprise, an opportunity arose after 9 years for him to return to Jersey Harbours as Harbour Master, latterly CEO; an enjoyable period in Brian’s working life that spanned 8 years.

Today, Brian remains active through his company, the Greenhill Consultancy Limited; whilst finding time for voluntary activities, such as being President of TS Jersey, Jersey Sea Cadet Corps, and driving forward the building of a new HQ for the award winning Unit.

As a Trustee of Channel Islands Airsearch, Brian is involved with fund and awareness raising for this unique service – known throughout the Channel Islands as ‘The Lifeboats’ Eyes in the Sky’. He is in demand to talk to clubs and societies about the work of Airsearch, its extremely well equipped Britten- Norman Islander aircraft and the voluntary and highly skilled crew-members that man it and have done so for the past 34 years.

As part of the Younger Bretheren at Trinity House, Brian provides talks on Trinity House's history and work, its development into one of the world's leading General Lighthouse Authorities and the work of the charity as it provides support and training for mariners, as well as touching on the changing maritime scene in our waters.

An active Rotarian, Brian serves on the Publicity Committee and assists with compiling press releases about the Club’s wide-ranging activities. For the past two years, since completing Jersey Tourism’s Bronze Award course, Brian has enjoyed conducting weekly Harbour Walks during an extended season (mid April – mid September). A family man, Brian is married to Valerie and has twin daughters Sarah and Louise, married to Christopher. Their young daughter Iris, Brian’s granddaughter, spends time at the family home in St Clement, Jersey – Iris making sure she has Brian’s full attention!

When time permits, Brian relaxes by playing the occasional game of golf and swimming.