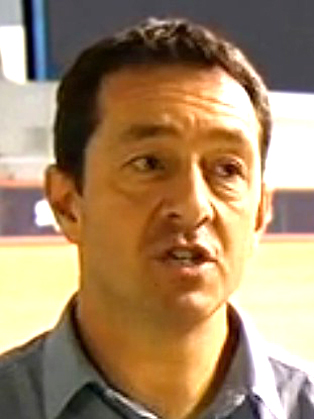 Chris is an Olympic gold medalist in cycling, being Britain's first cycling gold in over 70 years.

Chris Boardman won the 4km individual pursuit at the Barcelona Olympics and broke the world hour record three times. His was the nation's first gold in cycling for over 70 years. The iconic image of the Lotus machine and pointy helmet linked Chris forever with cutting edge technology. This was reinforced with Chris leading the research & development team for GB Cycling in the run up to the 2008 Beijing Olympics, where they became the most successful British sporting team of all time. He is now Greater Manchester’s Cycling and Walking Commissioner and intends to bring continental levels of bike use to the UK.

Chris Boardman first sprang into the public eye when he took Britain's opening gold medal at the 1992 Barcelona Olympics astride the infamous Lotus bike.

This was also Britain's first cycling gold medal in 72 years. The iconic image of the Lotus machine and pointy helmet linked Chris forever with cutting edge technology, something he later went on to reinforce by leading the R&D team for GB Cycling in the run up to Beijing, where they became the most successful British sporting team of all time.

Post cycling he went on to establish a name in journalism writing for various publications, including Diver magazine (his latest passion) and Pro Cycling. His self-penned biography, Triumphs and Turbulence went on to win the Sports Book of the Year award

He  works as a commentator for ITV and the BBC covering major cycling events. In 2007 he co-founded Boardman Bikes which went on to become Britains fastest growing bike brand of all time.

His passion for cycling as a mode of transport started when he sat on the National Cycling Strategy Board nearly 20yrs ago. Now, having been invited by Major Andy Bernham to become Greater Manchester’s first Cycling and Walking Commissioner, he is seeking to bring continental levels of cycling to UK streets.