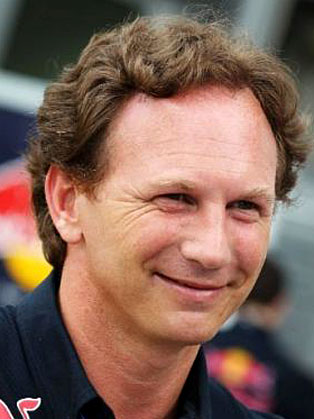 Christian is the Team Principal for the Red Bull Formula 1 team.

Christian Horner OBE is the Team Principal of the Infiniti Red Bull Racing Formula One team, a position he has held since 2005. His motorsport career started as a race car driver, before he switched roles to become Team Principal of FIA F3000 and later GP2 Series team Arden International Motorsport in 1999.

Towards the end of the 2012 season, as Red Bull Racing hovered on the cusp of wining a sixth title in three years, Christian Horner was asked to describe his role within the Milton Keynes squad. The Team Principal had no hesitation in reflecting any impending glory onto the team itself.

"My job is about managing the efforts of a huge team of people and it is really all about the team,” he said. "Formula One is the epitome of teamwork, an endeavour in which over 500 individuals all need to work in absolute harmony in order to achieve the end result on a Sunday afternoon.”

Indeed, it's Horner's keen ability to assemble the best talent the F1 paddock has to offer into a coherent whole that has seen Red Bull Racing blossom from a midfield outfit into a championship-winning team that has brought home Drivers' and Constructors' championship titles in each of the past three seasons. It is, however, a philosophy that stretches right back to the earliest days of the Team Principal's involvement in motorsport – as a driver.

In a promising junior series career that took him through stints in Formula Renault, British F3 and the FIA F3000 series, the future team boss gained invaluable first-hand experience of just what it takes to make a successful racer – with raw talent being only part of the package.

Horner realised that each cog in the racing machine, from driver to race engineer to mechanic, is an integral part of any success. It was a lesson learned in even greater depth when he stepped up to the International FIA F3000 series. There he not only raced but did so for his own team, Arden International, and it was there, after retiring from driving to concentrate on running the team, that his belief in the power of putting the right people in the right place snapped into focus.

Over the next six seasons Horner built Arden into a racing powerhouse, with the young team owner guiding the team to three Drivers' and Team Championships in succession. It was a remarkable record that brought Horner to the attention of Red Bull owner Dietrich Mateschitz, and when the drinks company took the radical step of setting up its own Formula One team for the 2005 season, it turned to Horner to run the operation.

Risky as the move seemed, the first-time F1 team principal seized with both hands the opportunity to apply the lessons learned in the junior formulae. Horner set about reinvigorating each department of the team he inherited in pursuit of a dedicated squad motivated by the singular goal of reaching the top.

The recruitment of Adrian Newey as chief technical officer was Horner's most obvious coup, but the policy of placing the right people in the right positions was applied across the team. And with Red Bull Racing also making judicious moves in the driver market, Horner had, by 2009, built an outfit capable of winning races, the first coming with a one-two finish for Sebastian Vettel and Mark Webber at the Chinese Grand Prix

The tale since has, of course, been one of enviable success. Runners-up finishes in both the Constructors' and Drivers' Championships in 2009 were followed the next season by the team's first championships. The Constructors' title came at the campaign's penultimate race in Brazil, while Sebastian Vettel became F1's youngest ever Drivers' champion by winning a thrilling four-way title battle at the season finale in Abu Dhabi

If the team's first championship could be said to have been a story of ebb and flow across the season involving a number of drivers and teams, 2011's defence of the titles was a case of complete domination, with Horner guiding the team to 12 victories, 27 podiums and a record 18 pole positions to claim back-to-back titles.

The back-to-back titles had been founded on hard-won technical excellence but for 2012 new rules wiped out much of that advantage and the team began the season chasing performance. Once again, though, Horner marshalled his forces, they dug deep and a strong second half of the season saw Red Bull Racing score four wins and five other podium finishes, enough to win a third Constructors' Crown.