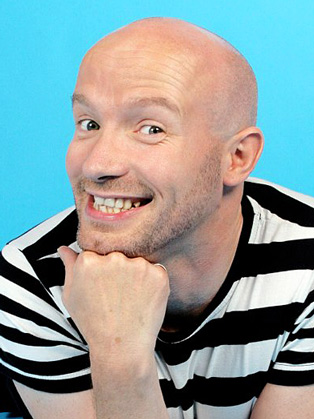 Craig Hill is a Scottish comedian, TV presenter and actor known for his cheeky, irreverent and camp act.

After experimenting with a Boots home bleach kit on the front of his hair in an effort to look like David Sylvian from Japan in the 80's and obsessing with his cousin's Girls World for most of his childhood, Craig eventually gave in to his passion and became a hairdresser. Much as he loved the patter and the reward of perming an otherwise dull, flat bob he then went on to explore his real passion- performing!

At 20 he enrolled at Langside College in Glasgow and had a ball playing 'Scrooge', 'Haemon' in the Greek Tragedy 'Antigone' and an excitable man with Tourettes!  This whetted his appetite and he went on to train as a professional actor at Queen Margaret College in Edinburgh.

Three years of stretching, dancing, singing, acting, and exploring ‘your inner self' (he was in heaven- and he and his inner self got on really well) he then went out into the big bad world of acting. Several roles later in Panto, short films and Theatre including the Edinburgh Grassmarket Project's Festival show 'Mad', he was then bitten by the comedy bug! Ow!

After years of Sunday afternoons in The Blue Moon Cafe reading out the Sunday Post letters page to amuse a bunch of his friends, one of them decided to do something about it!  Fully aware if she left him to it, it would never happen, his friend Sinead booked his first gig for him and sprung it on him 2 days before! The fear was overwhelming but not as much as the curiosity. The cat was killed, the gig was booked and a new comedian was born!

Craig very quickly started doing gigs and was encouraged to enter The Comedy Store's 'Stand Up For Hooch' competition where he was first runner up. Yippee! He was gobsmacked that after only 3 gigs his 4th was at 'The King's Theatre in Glasgow and 5th was at London's famous 'Comedy Store'! He was hooked!

2 years having fun doing Julie Andrews singing Punk songs and Shirley Bassey singing The Smiths followed, when BBC Scotland picked him up to join 4 new comedians for their much loved Friday night stand up show 'Live Floorshow'.  2 series later it went National and Craig was joined by Al Murray, Men In Coats, Reverend Obadiah Steppenwolfe III and a host of comedians and bands for 10 weeks on BBC 2 and loved it.

While he was having all this fun, Craig managed to do the Edinburgh Festival every year for the last 14 years, with such memorable titles such as 'Craig Hill Makes Your Whole Week!', 'Kilty Pleasures' and 'Why Don't You Come Down The Front?'.

In the last year Craig was thrilled to perform at Sydney Opera House and has been having a ball hosting events for Visit Britain and Visit Scotland in New York and Toronto and he even found time to nip over to Norway to do a gig for the Norwegian Navy! As well hosting Inverness' 'Red Hot Highland Fling' for the 3rd year running as part of their Hogmanay celebrations

He had his busiest Edinburgh Festival run so far last year with his show 'Tartan About'! And he's currently touring all over Scotland after winning the Radio Forth Fringe Award voted for by the listeners! He was right chuffed!