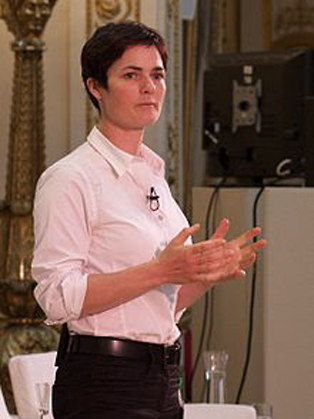 She is a founder of the Ellen MacArthur Cancer Trust, set up in 2003, a charity which takes young people aged between 8-24 sailing to help them regain their confidence on their way to recovery from cancer, leukaemia and other serious illnesses. Having become acutely aware of the finite nature of the resources our linear economy relies upon, she stepped away from professional sailing in 2009 to launch the Ellen MacArthur Foundation following 4 years traveling the world and researching the challenges facing our current global economy.nd the circular economy to life.

The Vendée Globe is the toughest challenge the oceans have to offer: competitors are alone at sea, circumnavigating the globe. Ellen captured the public’s attention on her first attempt as she battled against the elements and equipment failures for 94 days, finishing second and becoming the youngest person ever to have achieved the feat. After nearly a decade of professional sailing Ellen established the Ellen MacArthur Foundation, leaders in promoting education and innovation in order to hasten the adoption of the circular economy.

As a schoolgirl Ellen saved up to buy her first boat, an 8ft dinghy. By the time she was 18 she owned a 21ft pocket cruiser and sailed around Britain solo. That year she was named Young Sailor of the Year. A few years later she was taking on one of the toughest challenges in the world, the Vendée Globe.

Ellen became the youngest sailor to complete the gruelling race, finishing a remarkable second place. Her determination, bravery, and her video and radio updates documenting the physical and emotional trails of the journey made her a national hero. Even the French dubbed her the greatest English sailor since Nelson. She went on to break the record for the fastest solo circumnavigation by over a day, setting a number of other records on the way and becoming arguably one of the most famous sailors in the world.

After leaving competition, Ellen pursued her passion for the circular economy. Having travelled the world on boats where resource management is a life and death matter, she felt the world would soon face similar challenges. Working with companies including BT and National Grid, the Foundation seeks to encourage businesses to create products and services with the minimum of waste and the maximum utility.

Ellen will consider well alighned engagements which focus on topics she is passionate about.