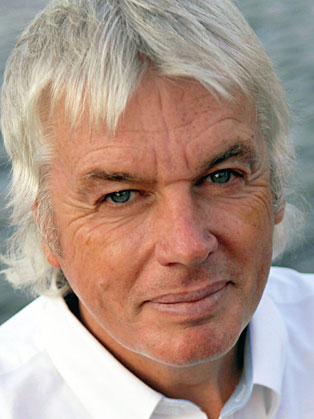 David Icke is an English public speaker and a former professional footballer.

David Icke is a writer, public speaker and sports broadcaster. He promotes conspiracy theories and about global politics and has written extensively about them.

David Icke was a BBC television sports presenter and spokesman for the Green Party, when in 1990 a psychic told him that he was a healer who had been placed on Earth for a purpose, and that the spirit world was going to pass messages to him. In March 1991 he held a press conference to announce that he was a "Son of the Godhead" – a phrase he said later the media had misunderstood. He said that a subsequent appearance on BBC's Wogan changed his life, turning him from a respected household name into a public laughing stock.

He nevertheless continued to develop his ideas, and in four books published over seven years—The Robots' Rebellion (1994), And the Truth Shall Set You Free (1995), The Biggest Secret (1999), and Children of the Matrix (2001)—he set out a worldview that combined New-Age spiritualism with a denunciation of totalitarian trends in the modern world.