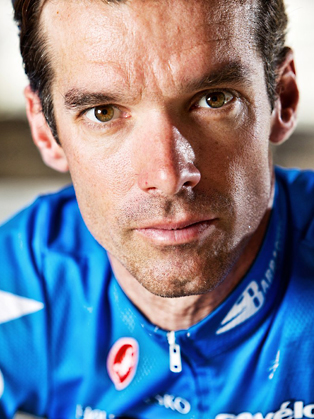 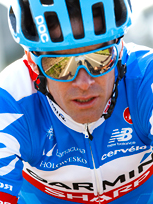 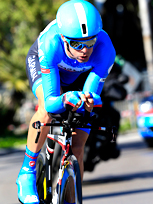 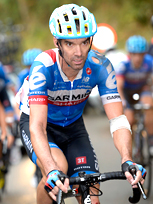 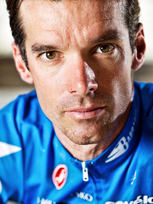 David Millar is the only British cyclist to have worn ALL four Jerseys from the Tour de France and ALL three of the Leader’s Jerseys in the Grand Tours.

David Millar is former British National Road Champion and Time Trial Champion, the only British Rider to have worn all the Leaders Jerseys from the Tour de France and one of only six British riders to have worn the Yellow Jersey. He was also the first of only two British riders ever to have worn the Leader’s Jersey in all three Grand Tours. Millar was banned for two years in 2004 after admitting taking banned performance enhancing drugs. During his ban and on his return to cycling in 2006 he worked with WADA and UKAD on various anti-doping initiatives and has become a voice for anti-doping within the sport. His final chapter in cycling saw him win Silver in the World Championships, stages of all three Grand Tours and write a best selling Autobiography. David retired from cycling at the end of 2014 season but remains actively involved in the sport.

David Millar was born in 1977 in Malta to Scottish parents.  Although a Scot he has been an expat ever since, having lived in Scotland, England, Hong Kong, France and now Spain.

As incongruous as it sounds it was during his time in Hong Kong that he became a cyclist after being introduced to the Tour de France through friends. Cycling became a haven, an escape in many ways.  During his HK school holidays he’d visit his mother in the UK who signed him up to the local cycling club to give him something to do.  From the first local club time trial it became clear that not only was it something he loved but something he was good at.  Before long he was on the GB national junior team and asking his parents if he could defer his place at art college to go to Belgium to race bikes and become a professional.

Within a year he was a professional cyclist for the biggest team in France.  Then things started to spiral out of control.  Entering into the world of professional cycling in what could arguably be described as the dark ages he found himself making decisions he’d never thought he’d make.

Success came: Tour de France stages wins, Vuelta Espana stage wins, leaders jerseys in both races, Time Trial World Champion, and enough other diverse results to be thought of as one of the greatest talents of his generation.  There was also doping.

He was banned for two years when reigning World Champion.  This should have been the end, the love was lost for the sport, the ban felt almost like a release.

It took a year of self-destruction to hit rock bottom, then things changed.  He fell back in love with cycling, the way he had done as a teenager in Hong Kong, it was a renaissance.

Since then he has won stages in the Tour de France, Vuelta Espana and Giro d’Italia.  Captained the GB team that helped Mark Cavendish win the World Championships in Copenhagen. Won Commonwealth Gold, and the National road, TT and pursuit titles.

In 2007 he became a part owner of Slipstream Sports, now known as Team Garmin-Sharp, and helped build the pioneering ‘Clean Team’ that played a key role in changing the face of professional cycling.  Through that and his role with the World Anti-Doping Agency as a member of their Athlete Committee he has become one of the key spokesman for anti-doping and one of the leaders in the change of culture within professional cycling.

His autobiography, Racing Through the Dark, was completed in 2011, it received critical acclaim and became a bestseller.  In 2013 he worked with Stephen Frears as the consultant on the upcoming Lance Armstrong film.  He’s also working on a film with the Scottish Documentary Institute that will be released in 2015.

Retired from racing in 2014 he now plans not to travel so much and spend some time with his wife and two sons in Catalonia.