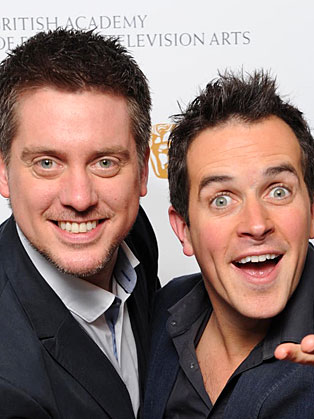 Dick and Dom are a comic double act consisting of the presenter Richard McCourt and Dominic Wood.

Dick and Dom’s media careers began when they first started hosting Dick and Dom in Da Bungalow, a children's entertainment show that was live during weekend mornings. The show ran for 5 series between 2002 and 2006 and was a massive hit.

In early 2011 they started new shows on CBBC: Dick and Dom’s Funny Business. Dick and Dom Go Wild, a nature series. Also in 2011 they began hosting the UK version of Spatalot! on CBBC and made their first film appearances in 'Horrid Henry the Movie’ and as hosts for the game show '2Cool4School'. They also both provide the voices of B1 and B2 in the ABC revived series, Bananas in Pajamas.

On September 2012, Dick and Dom’s Hoopla started on the CBBC Channel; A comedy show where it sees them host their own travelling funfair with games, acts, performers and celebrity appearances.

In January 2013 the first episode of Dick and Dom's newest series titled Absolute Genius with Dick and Dom was shown. An educational show that showed geniuses' work throughout the ages and how it has affected our modern day world. Each show was dedicated to one genius and the duo also attempted to recreate their works. The show continued with Series 2 in January 2014. A special series titled APPsolute Genius which focused on video games also aired in 2014.

In February 2013, Dick and Dom were confirmed to be the new voice presenters of the UK version of Takeshi’s Castle on Challenge.

In December/Jan 2013, Dick and Dom played the roles of King Arthur and Patsy in the West End revival of Spamalot.