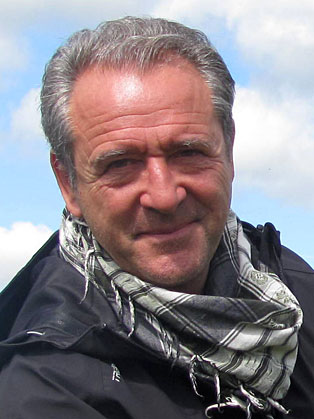 Best Selling Author of First Into Action: autobiography of life in the Special Boat Service as its youngest ever member. 8 books on his fictional hero, John Stratton. Maritime Security advisor and Crisis Manager/Responder to multi-national companies.

Best selling author of an autobiography describing life in the Special Boat Service and 3 years as an undercover operative in the highly secretive 14th intelligence detachment where he was Mentioned In Despatches. Falconer was the youngest member of Britain’s modern Special Forces. Author of 9 novels, 8 of them on his fictional hero, John Stratton. Falconer is a Maritime Security Specialist and a Crisis Manager and Responder to high profile organisations, and has worked as a specialist security advisor to international news, the UK government and others, the FBI, major airlines, NGOs and charity organisations. His first novel is being filmed soon.

Duncan Falconer is an author, screen-writer and crisis management specialist. Brought up in an orphanage, at 19 years old he was the youngest ever member of the elite British Special Boat Service in which he served for 12 years, 3 of them in the secretive undercover anti-terrorist unit, the 14thIntelligence detachment.

On leaving the military he lived in Los Angeles for 15 years as a screenwriter and along with some terrible movies, created a successful TV show that ran for 5 years.

On returning to the UK after 9/11 he spent 13 years taking correspondents into some of the world’s most hostile places such as the Congo and war-torn Liberia, managed kidnappings in Baghdad and Kabul, planned and executed evacuations and written emergency plans for organisations in places such as China, Africa and the Middle East.

Falconer has had 10 books published - an autobiography and 9 novels, 8 of them on his fictional Special Forces hero, John Stratton, with sub plots and characters taken from his many amazing experiences. He has sold the film rights to his book series, with the first of them already filmed and awaiting release.

Quote from a US Navy SEAL training with the SBS: “There’s the easy way and then there’s the British way.”

“…I was 19 years old, sitting in a bush waiting to kill my first terrorist. I was a member of the most elite Special Forces unit in the world, and I had to wonder what the hell I was doing there…”

“…Nick Robertson (CNN) and I were stuck in the middle of a demonstration in Falluja (Sunni Triangle of death) with 2000 men firing guns in the air. Our cameraman was kidnapped but we got him back. A week later they hung the charred bodies of Blackwater from a bridge…”

“…I was in Liberia, held in a checkpoint by a dozen child soldiers who were high on booze and drugs and armed to the teeth and only my wits were going to get us out of there…”

“…Nippy was desperately holding onto the submarine’s periscope as it cut through the waves, dragging his boat which was tied to my boat with 2 other SBS members in them…”