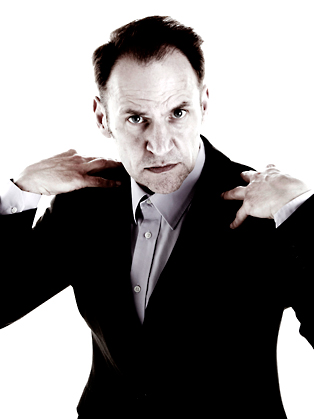 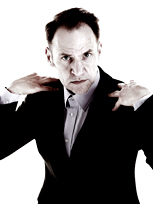 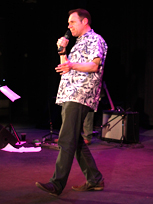 Geoff Whiting is a hugely successful stand-up comedian and developer of new acts.

Geoff Whiting is a hugely successful stand-up comic, being one of only a handful of comics worldwide to have performed stand up comedy in a pod on the London Eye, as well as developing and supporting comedians, such as Jimmy Carr, Michael McIntyre, and Sarah Millican, to their rise to fame.

He is one of only a handful of comics worldwide to have performed stand up comedy in a pod on the London Eye (for BBC: The One Show) and was the first English Speaking comic to ever perform at Club 99 in Bucharest, Romania.

When he is not performing, he books other comedians into comedy clubs too and has had the pleasure of seeing many new acts, such as Jimmy Carr and Sarah Millican, build their careers over the years.

"People think, 'Oh, you're a success now.' No. I was a success when I was 27 years old, because a guy called Geoff Whiting gave me £80 to drive to Plymouth to do a gig for 20 minutes. I was paid to think funny thoughts. It never gets any better than that." Jimmy Carr, Daily Mail 2011

"Geoff Whiting performed at our 2008 Christmas party and was, without doubt, the funniest comedian I have seen in a long time. He fully embraced a room full of scientists and though he had not been primed, seemed to instinctively know the topics that would lead to uncontrollable laughter. Geoff’s act was planned as a surprise and this he approached with great professionalism, tactfully waiting until the most appropriate moment to enter. His superb wit and original style of performing is ideal after dinner entertainment. I would certainly recommend Geoff for any corporate events and, in fact, we hope to work with Geoff again in the future." - Business Development Executive, Arrow Therapeutics

"Geoff Whiting performed at our internal summer party in June 2008 - a small handful of the Executive Management Team. It was a fantastic performance leaving the audience eager for more. Due to the size of the group, the performance had to be bespoke to the team and the preparation Geoff undertook was incorporated into the performance making the whole event more personal and warming. His interpersonal skills and reactions (or judgement) to the audience was invaluable - making the performance a superb experience. I would certainly recommend Geoff Whiting for both large and small group performances and we look forward to working with Geoff again very soon." - Executive Assistant to CEO, Merriweather

Geoff got things just right as both our compere for our awards evening and as a comedian with his own slot in the evenings entertainment. Given it was a corporate event he read the audience really well and was able to tread a line that kept HR happy yet didn’t in any way dilute the humour. He had the audience laughing out loud and got an excellent response during and at the end of his set. Whether it was male or female staff there was unanimous feedback on how much they had enjoyed his humour. We would happily recommend Geoff to any other audience, corporate or otherwise and we would definitely engage him again.