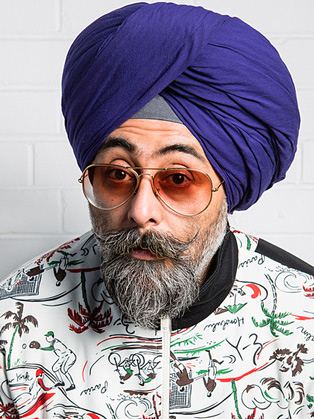 Hardeep Singh Kohli is a Scottish broadcaster and writer who has appeared on radio and television.

Hardeep Singh Kohli was born in Glasgow in 1969. A BAFTA-winning broadcaster, he was the writer of the Channel 4 hit Meet the Magoons, a presenter of Radio 4's Saturday Live, Midweek and The Food Programme, as well as contributor to numerous radio programmes such as Radio 4's Front Row and Radio 3's Nightwaves, and a movie reviewer on BBC Radio 5 Live.

Hardeep is a much respected and award winning broadcaster, comedian, writer and chef. Hardeep also sits on the Board of the National Theatre of Scotland.

He can be heard on BBC Radio 4, including shows such as Hardeep's Sunday Lunch and Pick Of The Week on BBC Radio 4. He has also regularly fronted programmes for BBC Radio 2, BBC World Service and BBC Asian Network.

Hardeep was a presenter for TalkRadio in the UK and he is also a regular on BBC1's Sunday Morning Live conducting interviews with Maureen Lipman, Nigel Benn and Lord Putnam amongst others. He is a regular on Channel 5's The Wright Stuff as both a panellist and guest host.

He has also written and presented a number of documentaries for Channel 4 and wrote, directed and starred in Meet the Magoos and has contributed to many major publications including The Observer, The Spectator, The Times and The Independent as well as being nominated for ‘Travel Writer of the Year’ at the AITO Awards for his piece in BA High Life.

Hardeep is also an experienced comedian who tours the country and sells out runs at the Edinburgh Fringe.