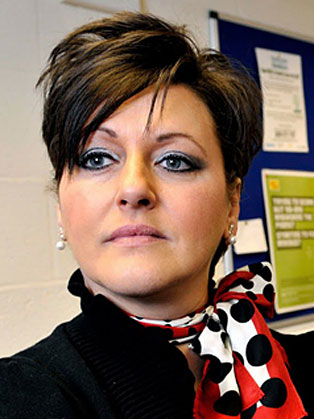 Hayley is best known for being the Fairy Job-Mother.

Hayley is the renowned Fairy JobMother, who takes on the challenge of getting the unemployed of Britain back into work. Appearing on a Channel 4 series 'Benefit Busters' projected Hayley into the limelight and public domain. Since then, she has travelled across the UK and over the water into the USA to pass on her advice and help people back into jobs.

Hayley Taylor left school at 16, went to college and achieved her dream of becoming  a hairdresser. Combining studies with evening work, she pushed herself to learn as much as she possibly could.  With ambition, communication skills and a passion for people she took evening classes in psychology classes while working full-time.

While working in a hair salon, which had a training school,  she was asked to step in when a tutor was sick.  That was her “thunderbolt moment” – the moment when she realised she wanted to pass on not only her expertise, but also her keen interest in educating adult learners.

With this in mind, Hayley looked for a job that combined both of her passions, and soon got the opportunity to work with unemployed learners who wanted to become hairdressers.  She worked during the day, studied her foundation in adult learning at night and became increasingly passionate about her unemployed trainees and the issues they faced.

During this time, Hayley met her husband Mark and twelve months later, their daughter was born, completing a happy family in every sense. But Mark was laid off from a job he had held for ten years putting the family into both financial and emotional jeopardy. Although Mark found new employment, it was an unskilled, low-paying position and the financial strain led to arguments and mounting debt. Meanwhile Hayley found life as a fulltime mother rewarding but lonely, and she gradually lost self-confidence and resented the career sacrifices she had made.

Once her daughter was at school full-time Hayley found herself looking for a job but she struggled. She felt she had lost her identity and self-belief.  But she accepted volunteering work and soon her abilities were recognised and her confidence grew.

Within months she was a manager of unemployed volunteers, passing on her knowledge and life skills. After two years Hayley was asked by the training provider to come and work for their company, a job she accepted and spent the next three years helping the unemployed face and overcome their barriers and move forward into gainful employment.

One day a film crew arrived at her office to film training providers who delivered governmental contracts. The crew was so impressed with Taylor’s innovative methods and success that she was featured in a three-part series on the UK’s Channel 4 called “Benefit Busters.” Overnight, she became the talk of the nation and received an offer from Channel 4 to host her own show, 'The Fairy Jobmother' which was a resounding success.