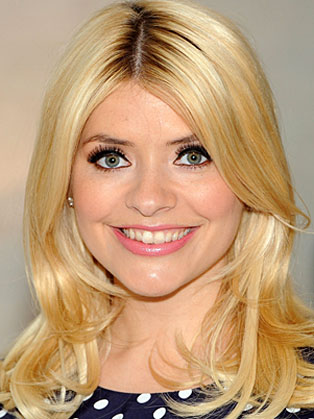 Holly Willoughby is best known for her television work with ITV. She has presented a number of television programmes alongside Phillip Schofield such as Dancing on Ice and This Morning.

At the age of 14, Holly was discovered by Storm Modelling Agency whilst on a school trip. In just a few years she had been the face of Rimmel, the body of Pretty Polly and appeared on the covers of various women's magazines. Holly has appeared in numerous TV commercials and proved herself as a natural in front of the camera. It was then she decided that TV presenting was the job for her.

Joining a friend for a casting led Holly to land her first job in Television when a Production Company were looking for a team of fresh and young presenters to host their new Saturday morning show, S Club TV.

In 2003, Holly recorded Call The Shots and Xperi-mental, along with coverage of Fame Academy (BBC) and Xchange (CBBC).

2006 started with a bang as alongside recording Saturday Showdown each week, Holly co-presented ITV1's ratings smash, Dancing on Ice. In February she co-presented ITV2's coverage of the BAFTA's Red Carpet and in May Holly recorded a new ITV2 show Lip Service which brought together all the weeks' gossip and clips from celebrity chat shows around the World.

In November 2006, Holly's hard work in children's television was recognised when she won the Children's BAFTA award for Best Presenter.

January 2007 saw Holly return to our screens to co-host the ratings smash second series of ITV's Dancing on Ice. From this she jumped straight in to present the Grease Is The Word spin off show Greased Lightnin' on ITV2.

2008 saw Holly co-present series 3 of Dancing on Ice for ITV1 on Sunday evenings, as well as her own Saturday evening show on ITV1, Dancing on Ice - Make Me A Star. As August arrived, Holly started presenting Xtra Factor on ITV2, which ran weekly on a Saturday until December. She also filmed a new weekly panel show for ITV2 with best friend Fearne Cotton and Leigh Francis, Celebrity Juice, which aired weekly from October.

2010 - 2011 and Holly continued to design her own clothing ranges for very.co.uk, as well as presenting This Morning and Celebrity Juice. Holly presented her final series of Dancing on Ice in January 2011.

2012 saw Holly host BBC One's new flagship entertainment show The Voice UK – the highest rated debut series on the BBC, as well as This Morning for ITV1 and Celebrity Juice for ITV2. In late 2012, Holly hosted the return of one of Britain's most fondly remembered and highest rating entertainment shows; Surprise Surprise. She co-hosted ITV1's Text Santa on the evening of 21st December, and for 2013 continues to host This Morning (winner of Best Daytime Programme at the 2013 NTA's), Surprise Surprise, Celebrity Juice, and The Voice UK (Series 2).