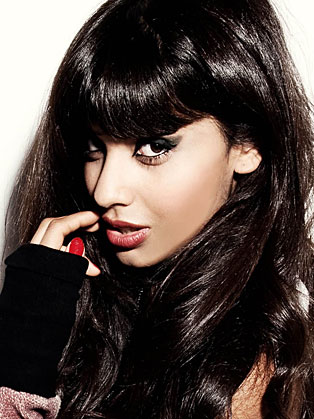 Jameela Jamil is best known for being a presenter for Channel 4.

Jameela Jamil is a British television presenter, radio presenter and model. She has appeared on various Channel 4 programmes and has been a presenter of T4 from 2009 until 2012 when T4 ended.

From teaching English a foreign language  to becoming one of the country’s top young broadcasters, London-born Jameela Jamil has come a long way in the last few years.

Bursting onto the scene in Autumn 2008, Jameela began her presenting career on the E4 Music Zone and with her stunning good looks, flash of red lippy, quirky dress sense and down to earth personality, she immediately caught the attention of both viewers and producers alike.

January 2009 saw Jameela join the T4 and Freshly Squeezed family where she went on to become a favourite weekend and weekday morning face. In 2010, Jameela got her first solo presenting role on Koko Pop, a music show filmed in Camden’s iconic club, Koko. The series proved a massive hit with viewers and was quickly re-commissioned and became a staple series on T4.

2012 kicked off with a new presenting role fronting E4’s cult series, Playing It Straight and Radio 1 announced they were signing Jameela up as one of their new young presenters, to host the Radio 1 Request Show on Sunday Evenings. More recently Jameela began presenting Radio 1’s Official Chart Show, making her the first female presenter to host the show solo since it began.

As well as her presenting duties 2012 saw Jameela launch her first clothing range, JAM by Jameela Jamil, with very.co.uk and she was also nominated for columnist of the year at both the prestigious PPA Awards and the BSME Awards for her monthly column in Company magazine.

In addition to her broadcast work, Jameela has also fronted a TV advertising campaign for international make-up brand Maybelline and has done numerous fashion shoots with magazines including American and UK Vogue, In Style and Esquire.