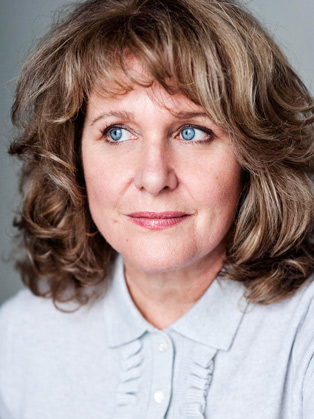 Jan Ravens is an English actress and impressionist.

Jan is the star of BBC's DEAD RINGERS on the BBC, best known for her impersonations of Theresa May, The Queen, Kirsty Wark, Fiona Bruce and Hillary Clinton, among many many others.

She has been seen in HEBBURN (2 series) for BBC2 and BIG BAD WORLD for Objective directed by Sandy Johnson, SKINS, LOVE SOUP, MIDSOMER MURDERS, RORY BREMNER'S COALITION REPORT and Janet Grimley in THE GRIMLEYS for ITV.

Recent stage work includes THE INTERVENTION with The Comedians Theatre Company at the Edinburgh Festival directed by Braham Murray at The Royal Exchange Manchester. Theatre credits include THE CHILDREN'S HOUR, directed by Sarah Frankcom, for the Royal Exchange; RSC, Chichester and Birmingham Rep.

Jan is a frequent guest of NEWSNIGHT, QUESTION TIME, MOCK THE WEEK and was a popular contestant on STRICTLY COME DANCING.

Jan is currently on a UK tour with Rory Bremner and 2017 also brings her much anticipated debut Edinburgh show 'Difficult Woman.'