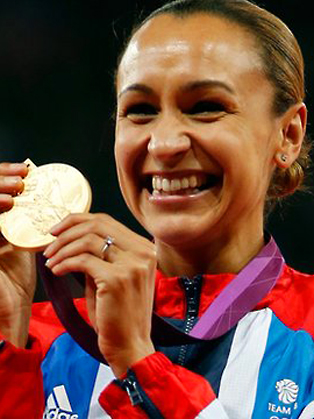 As poster-girl for the London 2012 Olympic Games, Dame Jessica Ennis-Hill stormed to victory in the Heptathlon to bring home her first Olympic gold medal.

One of the stars of the London 2012 Olympics, Dame Jessica Ennis-Hill was not just the 'poster girl' for the games, she also demonstrated the determination, competitiveness and sporting behaviour with which the games is synonymous. When Jess stormed home in first place in the 800m, her final event, it secured the gold medal for her, and in doing so captured one of the most memorable golds of the Olympics and providing one of the highlights of the London games.

In her first outdoor competition of 2009, Jessica broke her personal best, scoring 6,587 points to win by 510 points in Desenzano del Garda. This was a fantastic performance after she was forced to miss the Olympic Games in Beijing with a stress fracture in her ankle. She finished off the event with a personal best in the 800m of 2 minutes 9.88 seconds. This performance moved her to third on the UK all-time lists of heptathletes, with a score only bettered by former Olympic and Commonwealth champion, Denise Lewis (6,831 points), and former Commonwealth champion, Judy Simpson (6,623 points).

Jessica went into the 2009 World Championships in Berlin as a resounding favourite, the only British athlete to go into their event as the number one in the world that year. The pressure of being the bookie's favourite to win didn't affect her performance. Jessica duly delivered the goods, leading from the first event through to the last and recording a life-time best of 6,731 points, exactly 100 points behind Denise Lewis' UK record, which is surely on borrowed time. Her first day score has only been bettered by Jackie Joyner-Kersee and Carolina Kluft, the two top performing women heptathletes of all time. In total, over the season she recorded six personal bests in 100m, 800m, 100m hurdles, long jump, shot and javelin.

Jessica won the Olympic heptathlon gold medal at London Olympic 2012, the first for Britain on the track at the London Games. On her way to the gold medal she scored 6,955 points, that is her personal best career points as well as national record. She came 1st in 100m Hurdles, 200m and 800m Race. She came 2nd in Long Jump, 5th in High Jump, 9th in Shot Put, 10th in Javelin.

Jessica is a patron of the Sheffield Children's Hospital charity and of businessman Barrie Wells's sports foundation. She is also an Ambassador for the Jaguar Academy of Sport. She writes a column for The Times newspaper.

In October 2016 Jessica announced her retirement from athletics.

In the 2017 New Years Honours, Jessica was made a Dame for her services to athletics.