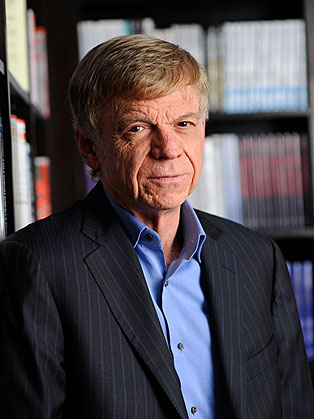 John is a world-renowned expert on leadership, and Business Week magazine's "Leadership Guru".

John Kotter spent over 30 yrs at Harvard studying change before forming his own organization Kotter International which helps leading companies implement their change strategies. His internationally bestselling "Leading Change", which outlines an actionable, 8-step process for implementing successful transformations, became the change bible for managers around the world. His academic articles in the Harvard Business Review have sold a million and a half copies and have been reprinted many times. His influence has been hailed by BusinessWeek, Fortune, The Financial Times and countless other publications around the world, being ranked number 34 in the Thinkers50 list of top business gurus 2011, as well as Business Week magazine's number 1 "leadership guru" in America 2001.

Professor John P. Kotter, a world-renowned expert on leadership at the Harvard Business School, has been the premier voice on how the best organizations actually "do" change. His international bestseller Leading Change -- which outlined an actionable, 8-step process for implementing successful transformations -- became the change bible for managers around the world.

Professor Kotter is a graduate of MIT and Harvard. He joined the Harvard Business School faculty in 1972. In 1980, at the age of thirty-three, he was voted tenure and a full professorship.

Professor Kotter is the author of 17 books, his most recent book is Buy-In: Saving Your Good Idea from Getting Shot Down (2010). Other books include A Sense of Urgency (2008), Our Iceberg is Melting (2006) of The Heart of Change (2002), John P. Kotter on What Leaders Really Do (1999), Matsushita Leadership (1997), Leading Change (1996), The New Rules (1995), Corporate Culture and Performance (1992), A Force for Change (1990), The Leadership Factor (1988) and Power and Influence (1985). His books have been reprinted in eighty foreign language editions, and total sales are approaching two million copies. He has also created two executive videos, "Leadership" (1991) and "Corporate Culture" (1993), and an educational CD-ROM (1998) based on the Leading Change book. His articles in the Harvard Business Review have sold a million and a half copies.

Kotter's honors include an Exxon Award for Innovation in Graduate Business School Curriculum Design and a Johnson, Smith and Knisely Award for New Perspectives in Business Leadership. In 1996, Leading Change was named the #1 management book of the year by Management General and in 1998, Matsushita Leadership won the Financial Times/Booz•Allen and Hamilton Global Business Book Award for biography/autobiography. In October 2001, Business Week magazine rated Kotter the #1 "leadership guru" in America based on a survey they conducted of 504 enterprises.

Kotter lives in Cambridge, Massachusetts and in Ashland, New Hampshire with his wife, Nancy Dearman, and his children, Caroline and Jonathan.