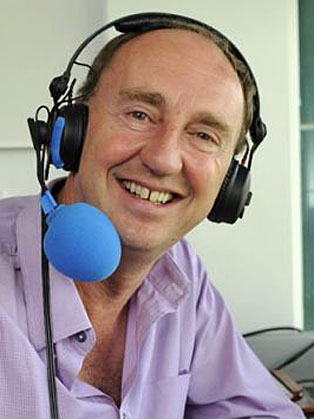 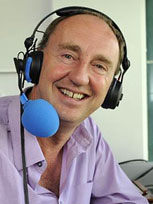 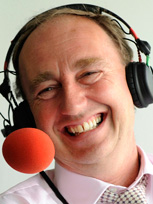 Jonathan Agnew – or “Aggers” as he is known to his many fans – is the BBC’s cricket correspondent and the senior member of the award-winning Test Match Special team.

Jonathan’s distinguished playing career began in 1978 when he made his debut for Leicestershire following impressive performances in club cricket. He was to stay with the county throughout his playing career before retiring aged 30. Jonathan played in 218 matches and took 666 wickets in his first-class career. During the 1987 season he took 101 wickets and his career-best bowling figures were 9-70. He took six ten-wicket hauls and was selected as one of the five Wisden Cricketers of the Year in 1988.

In 1992, two years after he retired, Jonathan made a dramatic return to the Leicestershire side when they suffered an injury crisis and asked him to play in their NatWest Trophy semi-final against Essex.  He posted respectable figures (12-2-31-1), helping his team to win the match but declined to play in the final.  Jonathan made his Test debut against the West Indies in August 1984 and went on to play three Tests and three One Day Internationals.

Jonathan began to gain experience as a journalist while still playing cricket, working for BBC Radio Leicester as a sports producer.  Following his retirement he had a brief stint as the cricket correspondent of Today newspaper before joining Test Match Special in 1990.  Here he learnt his trade working at close quarters with, among others, broadcast legend Brian Johnston.  In April 2011 Jonathan commentated on the Royal Wedding for BBC Radio 4 and in 2012 he covered the archery at the London Olympics for the BBC.

Away from the microphone Jonathan has lent his commentary prowess to several computer games and also contributes articles and podcasts to the BBC website and writes a column for the Waitrose Weekend supplement. He also regularly appears in theatre shows across the country, usually with his TMS sparring partner, Geoffrey Boycott or Phil Tufnell.

Jonathan is the author of many best-selling books including 8 Days A Week; Aggers’ Special Delivery; Inside the Box (with Peter Baxter); Ask Bearders (with Bill Frindall); Over To You Aggers; Thanks, Johnners: An Affectionate Tribute to a Broadcast Legend, the Jonathan Agnew’s Cricket Year series. and Aggers' Ashes. His most recent book, Cricket: A Modern Anthology, was published in 2013.

In what little spare time he has, Aggers loves nothing more than flying light aircraft and walking his dogs through the Leicestershire countryside. He is also proud to be a Deputy Lord Lieutenant for Leicestershire and was awarded an MBE in the 2017 New Year's Honours list for services to broadcasting.