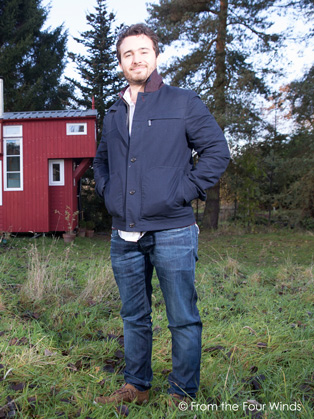 Josh Littlejohn MBE is one of the UK’s leading social entrepreneurs.

Josh Littlejohn MBE is the co-founder of Scottish social enterprise Social Bite, a national chain of sandwich and coffee shops, which shot to global fame when Holywood A-lister George Clooney visited an outlet in 2015. Another Oscar winner Leonardo Di Caprio then visited the social enterprise in 2016.

Social Bite competes in high street takeaway food, as well as the high-end restaurant market, but does so for a social purpose. 100% of Social Bite’s profits are donated to good causes and 1 in 4 of their staff are people from homeless backgrounds. Social Bite also feed the homeless with food that their customers pre-pay for. The organisation is by far the largest distributor of free fresh food and hot drinks to the homeless in the UK – giving away over 100,000 items each year.

Josh is also the founder of The Scottish Business Awards and as well as Clooney and Dicaprio, he has also enlisted the help of world leaders such as President Bill Clinton and Sir Richard Branson to support his social endeavours.

In 2016, Josh co-founded a Social Enterprise beer company called Brewgooder, where 100% of the profits go towards providing clean water. The brewery plans to provide clean drinking water for 1 million people in five years.

At the age of 30, Josh has raised over £4 million for charity and made a significant impact on the issue of homelessness in Scotland. Josh is an originator of social businesses, which not only tackle pressing issues but also radically challenge how we think about doing business.

In 2017, Josh was given an MBE in the New Years Honours list, which he dedicated to the homeless and marginalised. He has received 2 honorary doctorates and he also made the Debrett’s list of 500 most influential people in the UK 2017.

Josh concluded the year by raising more than £3.5M to help eradicate homelessness in Scotland, organising the world's biggest sleep-out event Sleep In The Park. Sir Bob Geldof, John Cleese and Liam Gallagher were just a few of the star names involved, with major media outlets covering the success of the event and Josh Littlejohn himself.