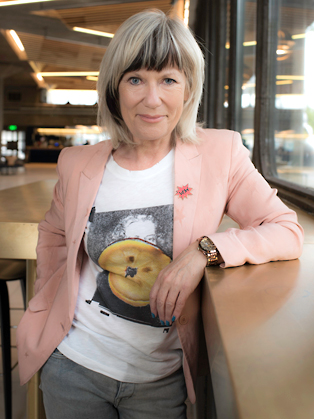 Jude Kelly is best known for being the Artistic Director of Southbank Centre as well as Founder and Director of The Wow Foundation.

Jude Kelly became Artistic Director of the Southbank Centre, Britain's largest cultural institution, in 2005. In the course of her career she has directed numerous award-winning theatrical productions. Since then she has founded and is the director of the WOW Foundation which runs WOW - Women of the World Festivals.

Jude Kelly is Founder and Director of The WOW Foundation which runs WOW - Women of the World Festivals to celebrate the achievements of women and girls and confront gender injustice across the globe. starting in London in 2010 the Festival now takes place in 30 locations across six continents. In 2018 Jude established The WOW Foundation, an independent charity dedicated to building the WOW movement as a force for positive change.

Jude Kelly was the Artistic Director of Southbank Centre in London for 12 years from 2006 to 2018, where she established the WOW Festival. Southbank Centre is Europe's largest Arts Institution and London's third biggest tourist attraction. In February 2013 she was named as one of the 100 most powerful women in the UK by BBC Radio 4's Womans's Hour.

Jude Kelly has directed over 200 theatre and opera productions, is the recipient of two Olivier Awards for her work in theatre, a BASCA Gold Badge Award winner for contribution to music, a Southbank Award for her opera work, an RPO award for her festival 'The Rest is Noise', Red Magazine's 2014 Creative Woman of the Year, CBI's 2016 First Woman Award winner for Tourism and Leisure and in 2017 won the inaugural Veuve Clicquot Woman of the Year Social Purpose Award. Jude's talk at the 2016 TED conference, 'Why women should tell the stories of humanity', has been viewed more than 1.2 million times to date.

Her work over many years has centred around the impact of arts and culture in democratising public space, and the imporance of female experiences in shaping the built environment.

Jude Kelly was a judge for the Stirling Prize 2018 and is currently undertaking a research project on the gender bias and ethical standards of city developments as part of her role as Practitioner in Residence at The LSEs Marshall Institute.

Jude was responsible for creating the Culture and Education aspects of London's 2012 Olympic and Paralympic bid and served on the Cultural Olympiad Board.

She founded a range of arts institutions including Battersea Arts Centre, the Leeds Playhouse and the international artists and community spaces METAL which are local catalysts for place-based change in Liverpool, Peterborough and Southend on Sea. She has commissioned and supported the work of hundreds of female artists across all genres.

She is a board member of the Cultural Industries Federation, the Patron of the Mary Wollstonecraft Programme, and Artistic Director of the Robert F Kennedy Festival of Human Rights. She has also Chaired the Women's Prize for fiction and is currently the chair for the Orwell Prize for Political Fiction.

On the international stage she has recently been honoured by the Finnish government in 2019 for her work with women and girls as well as being made a Knight of Denmark in 2018 for her service to culture, gender and sustainability.

In 2019 she co-founded SmartPurse, a financial toolkit to support women to become confident about money and protect themselves from financial vulnerability.