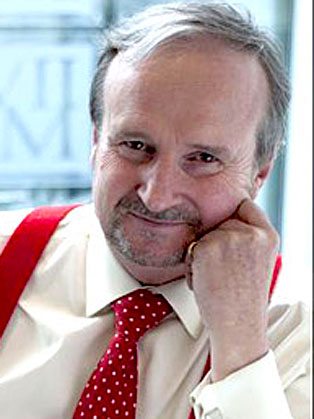 Justin is one of Britain's most familiar stockbrokers

Justin is one of the most recognisable and trusted market commentators on television, radio, and in the press. Originally trained as a lawyer, he has observed a unique understanding of the market's roles and benefits for the private investor. Having trained as a barrister, Justin took up international corporate finance, working in both Africa and Singapore then back in the UK. This led Justin to help found Broker Services in 1986, which went on to become Barclays Stockbrokers where he was Corporate Development Director.

Having trained as a barrister, Justin took up corporate finance, working in both Africa and Singapore. He then returned to the UK and helped in the developments towards Big Bang in 1986 in London which led to him helping to found Broker Services in the same year. Broker Services went on to become Barclays Stockbrokers, where Justin was Corporate Development Director.

Justin has a keen interest in developing the investment market to break down as many of the traditional barriers as possible for both private investors and smaller companies. As part of this he was involved in the original development of the AIM market and the investor educational company, Proshare.

He writes regularly for national magazines and newspapers, and is a frequent commentator on television and radio, both in the UK and abroad.

Justin in a commentator in the media on market events and developments. He appears frequently on shows such as: BBC1 Business Breakfast; BBC Radio 5Live; BBC2's Wake up to Money; and Working Lunch on BBC Radio 4. His vast knowledge and extensive experience make him a captivating expert speaker.