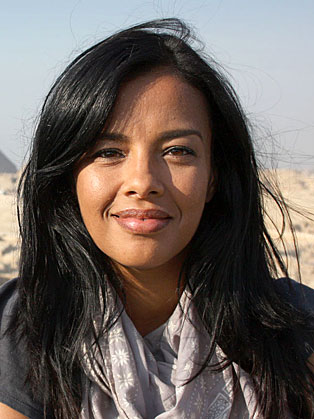 Liz Bonnin is a French-born Irish television presenter who has worked on television in both Ireland and the United Kingdom.

Liz Bonnin has worked on television in both Ireland and the UK and currently presents Bang Goes the Theory and Countrywise.

Liz had always been interested in biology and chemistry at school, and she went on to study Biochemistry at University. After graduating, she started a career as a TV presenter working on such shows as BBC One's Top of the Pops, before returning to her first love, science, and completing a Masters in Wild Animal Biology and Conservation. Liz's main interests during her studies were animal behaviour and intelligence and big cat conservation. She set up and carried out a research project on the diet of tigers in Bardia National Park, Nepal, which saw her come first in her class.

Liz's TV career has drawn heavily on her academic expertise. In the latest series of Horizon on BBC Two, Liz presents new scientific research raising hard questions about zoos. She has also been busy this year filming a brand new wildlife series for BBC One about animal migrations called Nature’s Epic Journeys, which broadcast in May 2016. Last year, Liz presented the hugely successful Big Blue Live series in Monterey, California for the BBC, and for PBS in the USA. Other TV credits include wildlife and animal behaviour programmes Super Smart Animals, Animals in Love, Animals through the Night: Sleepover at the Zoo, Operation Snow Tiger and Animal Odd Couples; science series Horizon, Stargazing Live and Bang Goes the Theory; documentaries Egypt's Lost Cities, Museum of Life and Science Friction; and ITV's popular Countrywise. Liz will also be appearing in the soon to be broadcast new series of Who-Do-You-Think-You-Are? on BBC One.

In addition to her TV work, Liz is a conference facilitator and awards host, and has MC'd various events, including most recently, the UK's National Science and Engineering Competition Awards and the Natural History Museum's prestigious Wildlife Photographer of the Year Awards