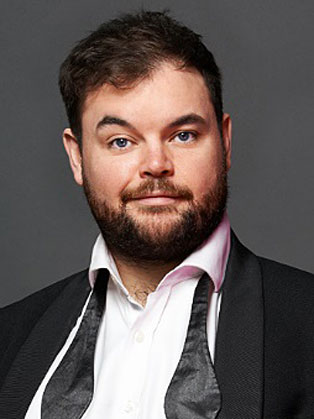 Lloyd Griffith is a Grimsby-born Comedian.

Lloyd Griffith is a comedian, a choirboy and an ‘aspiring’ goalkeeper. He’s the co-host of Soccer AM on Sky Sports every Saturday morning and also co-host of FLINCH on Netflix. You may have also seen Lloyd in 8 Out Of 10 Cats (Channel 4), Bounty Hunters (Sky), Comedy Central Live at The Comedy Store (Comedy Central), Roast Battle (Comedy Central), Drunk History (Comedy Central), Taxi To Training (BBC3), Football’s Funniest Moments (Sky), The Premier League Show (BBC2) and many more.

Since starting comedy in 2009, Lloyd has quickly established himself as one of the most natural, brightest and original comedians on the circuit and now regularly performs at some of the largest clubs in the UK.

Lloyd’s love of Grimsby Town FC goes beyond supporting them at the terraces. Just before Christmas 2014, his ‘Grimsby Town FC Christmas message,’ which was written and produced by Lloyd, as well as starring in it went viral and appeared in pretty much every news website.

In 2014 Lloyd made his solo Edinburgh debut at The Pleasance with Voice of an Angel, Body of Trucker as well as leading the choir in Nick Helm’s Two Night Stand in The Grand. Prior to this Lloyd performed in Edinburgh as part of the prestigious AAA Stand-Up showcase in 2012 and then the Big Value Comedy Showcase in 2013 as well as appearing in Charlie Baker’s Baker’s Dozen.

Singing wise, Lloyd is a professional (choral) singer and can be heard performing with the choirs of Westminster Abbey, St George’s Chapel – Windsor Castle and various other London groups.

Lloyd was the face of the FIFA16 campaign and has travelled the world on his quest for the ultimate football team including Lionel Messi, Ryan Giggs and Gary Neville. His short film premiered on Sky Sports in January 2016.

He recently supported Jack Whitehall and Rob Beckett on their respective sold out UK tours including dates at Liverpool Echo, Newcastle Metro, Manchester, Leeds and Wembley Arenas and Hammersmith Apollo. Lloyd had to extend his first UK tour into 2018 after the 2017 leg sold out and is currently on his 2019 tour All:Rounder.

An infectiously affable nature and the ability to spin a great yarn.

His sense of fun is infectious, his singing voice faultless and his anecdotes are told with boundless confidence. Griffith has clearly established his own style of comedy.

Expect to hear more from Griffith