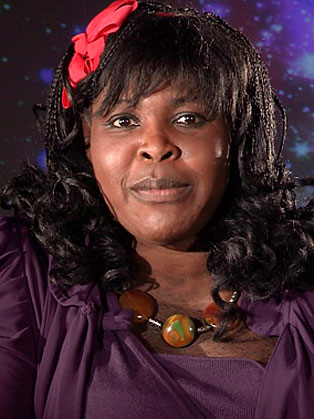 Maggie Aderin-Pocock is best known as an English space scientist and co-presenter of the programme The Sky at Night.

Maggie Aderin-Pocock is an English space scientist. She is a research fellow in UCL Department of Science and Technology Studies. Since 2014, she has co-presented the long running astronomy TV programme The Sky at Night.

Maggie Aderin-Pocock MBE was born in London, to Nigerian parents. She has Dyslexia and, as a child, when she told a teacher she wanted to be an astronaut, it was suggested she try nursing, “because that’s scientific, too”. She gained four A-Levels in maths, physics, biology and chemistry.

She attended Imperial College London, earning a BSc in physics in 1990 and a doctorate in mechanical engineering in 1994. Her thesis was accepted in 1995, entitled "Interferometric Studies of Very Thin Lubricant Films in Concentrated Contacts". This project involved development of an ultra-thin film measurement system (using spectroscopy and interferometry to the 2.5 nm level). This doctoral research involved improving the optical performance and the mechanical design of the system, as well as development of control and image processing software. Other techniques at the time could only operate to the micron level with much poorer resolution. This development work resulted in the instrument being sold by an Imperial College spin-off company.

Aderin-Pocock has worked on many projects, from private industry to government contracts to academic research. She began in the Ministry of Defence on missle warning systems. She then worked on hand-held instruments to detect landmines. Aderin-Pocock moved back to Imperial College London in 1999 with a fellowship from the Science and Technology Facilities Council to work with the group developing a high-resolution spectrograph for the Gemini telescope in Chile, which probes the heart of stars by converting the starlight gathered by huge telescopes into the spectrum of colours, and then analyses them to work out what's happening billions of miles away.

Aderin-Pocock is committed to inspiring new generations of astronauts, engineers and scientists and she has spoken to about 25,000 children, many of them at inner-city schools telling them how and why she is a scientist, busting myths about careers, class and gender. Through this Aderin-Pocock conducts "Tours of the Universe", a scheme she set up to engage school children and adults around the world in the wonders of space.

She also helps encourage scientific endeavours of young people by being a celebrity judge at the National Science + Engineering Competition. The finals of this competition are held at The Big Bang Fair in March each year to reward young people who have achieved excellence in a science, technology, engineering or maths project.