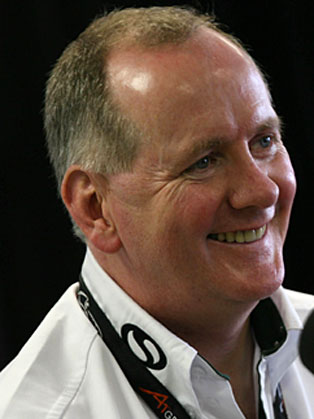 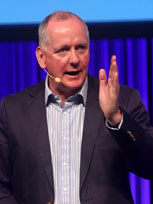 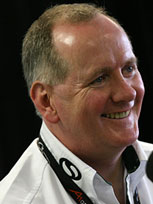 Mark Gallagher is a renowned public speaker on a range of business topics relating to experience gained while working in senior management roles within Formula One over the last 30 years.

Mark Gallagher’s career in Formula One started in 1983, spending seven years working in the media before joining Eddie Jordan’s fledgling Grand Prix team in 1990, later joining the team’s management board. He became part of the newly created Red Bull Racing management team in 2004, and was invited to lead Cosworth’s return to Formula One as an engine supplier in 2010, overseeing its supply of one-third of the teams on the starting grid.

Mark Gallagher has worked in Formula One for over 30 years, including holding senior leadership roles within Jordan Grand Prix, Red Bull Racing and Cosworth Engineering.  During his career he has worked with many of the sport’s leading drivers, including Ayrton Senna, Michael Schumacher, Jenson Button and David Coulthard. During the last 18 years he has become a renowned public speaker on a range of Formula One business topics including leadership, team work, safety culture and data-driven performance management.

Born in Belfast, Northern Ireland, Mark studied Economics at Queens University and, after graduating in 1983, left for London where he joined Autosport magazine.  He moved to Autocar before joining the Sunday Express newspaper, later becoming a freelance Formula One journalist and broadcaster, including for BBC Radio 2 Sport and Eurosport.

After seven years working in the media he was contracted to Eddie Jordan’s fledgling Grand Prix team in 1990-91, handling PR and media communications during the team’s first season in Formula One. He subsequently spent two years working in the World Rally Championship with Ford before returning to Jordan on a full time basis as sponsorship manager in 1995.  In 1998 he was promoted to the team’s management board as head of marketing and communications, and played a key role in Jordan’s rise to prominence which saw the team achieve Grand Prix victories and challenge for the World Championship title.

In 2003 Mark departed Jordan, spending a year on the management of rising Formula One star Jenson Button, but soon returned to working with a team, becoming responsible for sponsorship and commercial affairs at Jaguar Racing and Red Bull Racing in 2004-5.

In mid 2005 he established his own team, Status Grand Prix, competing in the A1GP World Cup of Motorsport, and guided it to championship-winning success for Team Ireland in 2009.  Although continuing to co-own Status, which became a race winning team in GP2 and GP3, Mark agreed to join the world famous Cosworth organisation in late 2009, overseeing its return to Formula One as an engine supplier to one third of the teams on the grid, including the legendary Williams F1 team.  Over the next two years he also worked closely with the sports governing body, the FIA, to develop the revolutionary new hybrid powertrain regulations which were adopted by Formula One in 2014.

Today Mark has a number of business interests in Formula One, including working with multinational companies to provide insights into the business lessons which can be learned from this high technology sport.  In this role he works with a number of well known names in Formula One, including multiple Grand Prix winners David Coulthard and Mark Webber and former World Champions Mika Hakkinen and Jacques Villeneuve.

He is also part of the BBC Radio 5 Live commentary team, and recently published his second book; ‘The Business of Winning - Strategic Success from the Formula One track to the Boardroom’, published by Kogan Page in London.  Between 2006 and 2010 he acted as consultant to Disney Pixar on the animated films CARS and CARS 2.