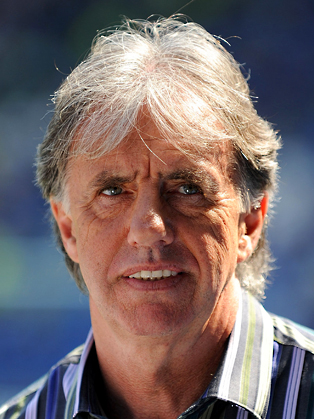 Mark is a former Liverpool and Republic of Ireland international, and now a popular pundit on Match of the Day.

Mark began his career at Preston North End, and also played for Brighton and Hove Albion before moving to Liverpool in 1981. He won many honours with the Liverpool and formed a defensive partnership with Alan Hansen that is still regarded as one of the best-ever in English club football. Mark was capped 39 times by the Republic of Ireland, before an Achilles injury brought his playing career to a premature end at the age of 30. Mark has been a regular BBC football pundit since 1997, often teaming up with old club-mate Hansen.

He began his career, as a 17 year-old, with his hometown club, Preston North End in 1974 who were then managed by World Cup winner Bobby Charlton. When he moved to Liverpool for a club transfer record of £900,000 he started out as a left-back, replacing Alan Kennedy for a while. He was to form a formidable central defensive partnership with Alan Hansen and figured in 39 of the 42 games that would lead to him winning the first of the five championship medals he would gain during his time at Anfield.

Mark was born in England, but he played for the Republic of Ireland national side because his grandfather Thomas Crotty was born in Waterford. He made his debut on 24 April 1977 at Dalymount Park in a friendly with Poland, the game ended 0–0. Lawrenson’s season was made complete when he was voted Preston’s Player of the Year for the 1976/77 season.

Lawrenson also spent some time as a successful manager. After his time at Liverpool, he was appointed Oxford United manager in 1988. He also managed Peterborough United from 6 September 1989 until 9 November 1990.

He is perhaps best known today as a well-respected commentator and authority on the tactical side of the game. Lawrenson was the main co-commentator on major national and international (FIFA) matches covered by the BBC, and he appears regularly on Football Focus and Match of the Day.

He is also often a co-commentator on BBC Radio Five Live, often working on the feature matches on Sunday afternoons.

He also writes a regular Preston North End column for the University of Central Lancashire’s Students’ Union newspaper, Pluto, and a weekly column for the Liverpool Daily Post newspaper.

His face is still a familiar addition to the sporting scene and his powerful motivational speeches are in demand at company seminars nationwide.

Mark Lawrenson is best remembered for his partnership with Alan Hansen at the heart of the Liverpool defence, which is still seen as one of the best in club football. He was capped 39 times by the Republic of Ireland, before injury brought his playing career to a premature end. After hanging up his boots, he managed Oxford United and worked alongside Kevin Keegan as a defensive coach at Newcastle.