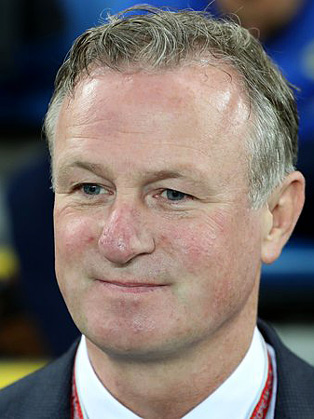 Michael O’Neill has been manager of the Northern Ireland senior men’s international team since December 2011.

Michael O’Neill is an inspirational speaker who shares his story on how under his leadership using analytical data and strong man management, his team were inspired to deliver against all odds to top their qualifying group in the 2016 UEFA European Qualifiers.  This achievement ended a 30-year absence from tournament football and created history with Northern Ireland competing in the first ever UEFA EURO Championship finals in 2016.

The team - the first from Northern Ireland to compete at a European Championship finals - reached the Round of 16 at Euro 2016 last June, exiting the tournament after a narrow 1-0 defeat to Wales.

In the group games in France they lost 1-0 to Poland in Nice and Germany in Paris respectively but earned an historic 2-0 win against Ukraine in Lyon thanks to goals from Gareth McAuley and Niall McGinn.

Under Michael’s guidance Northern Ireland have started their qualifying campaign for World Cup 2018 strongly. They currently lie second in Qualifying Group C behind world champions Germany. To date they have defeated San Marino (4-0) at home, Azerbaijan home and away (4-0 and 1-0) and Norway (2-0) at home, drawn with Czech Republic away (0-0) and lost 2-0 away to Germany.

At the end of 2015 Michael won the BBC Sports Personality of the Year Coach Award and the RTE Sports Manager of the Year Award. In 2017 he was appointed an MBE by the Queen for services to football and to the community in Northern Ireland. Michael also received an honorary degree from Ulster University for his outstanding contribution to sport in July 2017.

Michael studied Maths & Statistics at the Open University and is a fully qualified Independent Financial Advisor.  He draws on his experience of working as Financial Consultant for EY to relate to a business audience.