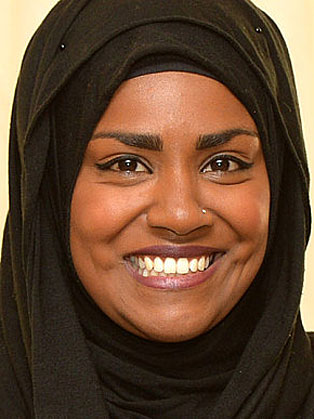 Nadiya Hussain is best known for being the winner of much loved programme The Great British Bake Off,

Nadiya Hussain won the sixth series of BBC's The Great British Bake Off in October 2015 and subsequently wrote for The Times Magazine, and signed a publishing deal with Penguin Random House.

In The Great British Bake Off’s final she baked 16 iced buns in three hours, as well as raspberry-flavoured mille-feuille, to one of Paul Hollywood’s recipes, in two hours, and a multi-layered presentation showstopper which took the form of “My Big Fat British Wedding Cake”, in a time of four hours. With more than 15 million viewers, The Great Britisj Bake Off final was the most-watched show of 2015.

Hussain's writes a weekly column for The Times Magazine, a part of the Saturday supplement of the times, as well as a monthly column in Essentials Magazine, and her recipes have also appeared in BBC’s Good Food magazine.

In December 2015 Hussain was signed by UK publisher Michael Joseph, part of Penguin Random House, for her debut book featuring both cooking and baking recipes. Michael Joseph had previously published the autobiography of The Great British Bake Off co-host Sue Perkins, as well as cookery books by Jamie Oliver.