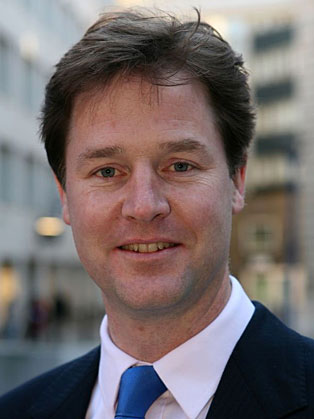 Nick Clegg was the former leader of the British Liberal Democrats Party.

Nick Clegg is a British Liberal Democrats politician who was the Deputy Prime Minister of the United Kingdom and Lord President of the Council from 2010 to 2015 in the Cameron coalition ministry.

As Deputy Prime Minister, Nick Clegg occupied the second highest office in the country at a time when the United Kingdom was recovering from a deep recession following the banking crisis of 2008. Despite the hugely controversial decisions needed to restore stability to the public finances, Nick Clegg successfully maintained his party's support for a full five-year term of office.

During that time, he was also at the heart of decisions surrounding the conflict in Libya, new anti-terrorism measures, the referenda on electoral reform and Scottish independence, and extensive reforms to the education, health and pensions systems. He was particularly associated with landmark changes to the funding of schools, early years’ education and the treatment of mental health within the NHS.

Throughout his time in office, he made himself more available to public scrutiny than any other senior British politician, most notably through his weekly radio call-in show on LBC, "Call Clegg", which was widely viewed as an important broadcast innovation.

He remains an outspoken advocate of civil liberties and centre ground politics, of radical measures to boost social mobility, and of an internationalist approach to world affairs.

Nick Clegg’s book, ‘Politics: Between the Extremes’, was published in September 2016 by Bodley Head and became a Sunday Times Best Seller. The book has been described as ‘Engrossing’ (The Times), ‘…fluent and chatty…thoughtful’ (The Telegraph) and was named The Financial Times ‘Book of the Year’ and one of two ‘Books of the Year’ by The Guardian.

Prior to his entry into British politics, he served as a leading Member of the European Parliament on trade and industry affairs and as an international trade negotiator in the European Commission dealing with the accession of China and Russia into the World Trade Organisation. Nick co-founded the Campaign for Parliamentary Reform, which led calls for reforms to expenses, transparency and accountability in the European Parliament. He has also held part time positions at Sheffield University, wrote newspaper articles and won a writing prize at the Financial Times in the early 1990s.

Nick Clegg is fluent in five European languages including English, German, Spanish, French, and Dutch. He studied Archaeology and Anthropology at Cambridge and took a year to study and write a political thesis at the University of Minnesota, before attaining a master’s degree at the College of Europe in Bruges.