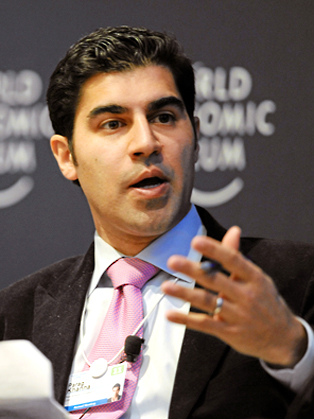 Parag Khanna is a leading global strategist, world traveler, and best-selling author. He is a Senior Research Fellow in the Centre on Asia and Globalisation at the Lee Kuan Yew School of Public Policy at the National University of Singapore. He is also the Managing Partner of Hybrid Reality, a boutique geostrategic advisory firm, and Co-Founder & CEO of Factotum, a leading content branding agency.

Parag Khanna is a leading global strategist, world traveler, and best-selling author. He is a Senior Research Fellow in the Centre on Asia and Globalisation at the Lee Kuan Yew School of Public Policy at the National University of Singapore. He is also the Managing Partner of Hybrid Reality, a boutique geostrategic advisory firm, and CEO of Factotum, an exclusive content branding agency.

Parag's latest book is Technocracy in America: Rise of the Info-State (2017). He is author of a trilogy of books on the future of world order beginning with The Second World: Empires and Influence in the New Global Order (2008), followed by How to Run the World: Charting a Course to the Next Renaissance (2011), and concluding with Connectography: Mapping the Future of Global Civilization (2016). He is also co-author of Hybrid Reality: Thriving in the Emerging Human-Technology Civilization (2012). In 2008, Parag was named one of Esquire’s “75 Most Influential People of the 21st Century,” and featured in WIRED magazine’s “Smart List.”

Parag has been an adviser to the U.S. National Intelligence Council’s Global Trends 2030 program. From 2006-2015 he was a senior research fellow at the New America Foundation. During 2007 he served in Iraq and Afghanistan as a senior geopolitical adviser to United States Special Operations Forces. From 2002-5, he was the Global Governance Fellow at the Brookings Institution; from 2000-2002 he worked at the World Economic Forum in Geneva; and from 1999-2000, he was a Research Associate at the Council on Foreign Relations in New York.

A widely cited global intellectual, Dr. Khanna provides regular commentaries for international media. He is currently a CNN Global Contributor. His 2008 cover story for the New York Times Magazine titled “Waving Goodbye to Hegemony,” is one of the most globally debated and influential essays since the end of the Cold War. His articles have appeared in major international publications such as the Wall Street Journal, Financial Times, Washington Post, Harvard Business Review, TIME, Foreign Affairs, Forbes, The Atlantic, Quartz, Foreign Policy, Harper’s, BusinessWeek, The Guardian, The National Interest, McKinsey Quarterly, The American Interest, Stratfor, Esquire, Slate.com, and Die Zeit. He is a contributing editor to WorldPost and serves on the editorial board of Global Policy and as a consultant to the National Geographic series Origins.

He also appears frequently in media around the world such as CNN, BBC, CNBC, Al Jazeera and other broadcasters. In 2010 he became the first video-blogger for ForeignPolicy.com and from 2010-12 co-authored the Hybrid Reality blog on BigThink. From 2008-9, Parag was the host of “InnerView” on MTV. He spoke at TED in 2016, TED Global 2009 and was a guest host of TED Global 2012.

Parag lectures frequently at international conferences and gives tailored briefings to government leaders and corporate executives on global trends and scenarios, systemic risks and technological disruptions, and market entry strategies and economic master planning. He has provided expertise to many governments including the US, Canada, Brazil, Argentina, UK, Germany, Switzerland, the Netherlands, Norway, Finland, Italy, Estonia, Russia, Azerbaijan, Kazakhstan, the United Arab Emirates, Qatar, Japan, China, India, Australia, South Korea, Pakistan, Indonesia, the Philippines, Mongolia, Bhutan, and numerous others. In 2016 he served on the Singapore government's Committee on the Future Economy. He is currently a senior advisor to Globality and serves on the advisory boards of GeoQuant, Graticule Asset Management Asia (GAMA) and East India Capital Management (EICM), and previously on the Innovation Advisory Board of DBS Bank.

Dr. Khanna holds a PhD in international relations from the London School of Economics, and Bachelors and Masters degrees from the School of Foreign Service at Georgetown University. In 2017 he was awarded a Richard von Weizsaecker fellowship of the Robert Bosch Academy. He has been a Senior Fellow of the Singapore Institute of International Affairs, Visiting Fellow at LSE IDEAS, Senior Fellow at the European Council on Foreign Relations, Distinguished Visitor at the Munk School of Global Affairs at the University of Toronto, Distinguished Visitor at the American Academy in Berlin, Next Generation Fellow of the American Assembly, Visiting Fellow at the Lee Kwan Yew School of Public Policy, Non-Resident Associate of the Institute for the Study of Diplomacy at Georgetown University, and a Visiting Fellow at the Observer Research Foundation in New Delhi. He has received grants from the United Nations Foundation, Smith Richardson Foundation, and Ford Foundation.

Born in India, Parag grew up in the United Arab Emirates, New York, and Germany. He is an accomplished adventurer who has traveled to more than 100 countries on all continents. Some of his lengthy journeys include driving from the Baltic Sea through the Balkans and across Turkey and the Caucasus to the Caspian Sea, across the rugged terrain of Tibet and Xinjiang provinces in western China, and ten thousand kilometers from London to Ulaanbaatar in the Mongolia Charity Rally. He has climbed numerous 20,000-foot plus peaks, and trekked in the Alps, Himalayas, and Tien Shan mountain ranges. Parag is also a competitive tennis player.

Parag has been honored as a Young Global Leader of the World Economic Forum and has served on the WEF’s Global Future Council on Mobility, Global Agenda Council on Geoeconomics, and advisory board of its Future of Urban Development Initiative. He also serves on the Council of the American Geographical Society, advisory board of Independent Diplomat and board of trustees of the New Cities Foundation. He is a former term member of the Council on Foreign Relations, International Institute for Strategic Studies, and a Fellow of the Royal Geographical Society. In 2002 he was awarded the OECD Future Leaders Prize. He speaks German, Hindi, French, Spanish and basic Arabic.

Our partners and clients are seeking to understand and be confident in the face of Asia’s complex dynamics. Parag delivered the keynote address at our recent ASEAN Connections client forum in Singapore. He demonstrated a unique ability to simplify the complex and interlink geopolitical, economic and business concepts into engaging and informative discussion points, complete with the latest data and striking visuals.

Parag's keynote was exactly the macro view we needed to stimulate conversations on the intersection of financial services and emerging digital technologies. Very stimulating for our executives and clients.