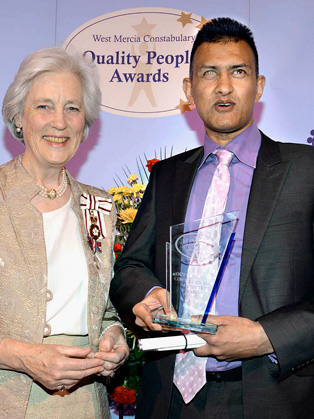 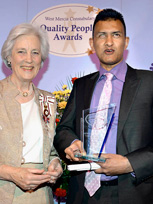 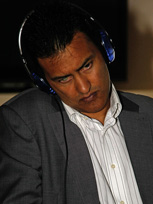 Pervez Hussain is a truly inspirational speaker who believes that like him, you can achieve your full potential with the right knowledge, skills, attitude and behaviour.

Pervez Hussain was brought up in the inner City of Birmingham. He experiences eyesight problems from an early age and despite numerous operations he completely lost his sight at the age of 23. Despite being unable to read Braille, this undeterred him and he started using memory to assist with work and everyday tasks, committing to memory large chunks of information.

After moving on from delivering diversity training in his existing work environment, he then went on to set up his own company delivering this training to outside organisations and agencies.

He also undertook management leadership training – helping others to help themselves in progressing in their area of work – what can be better than helping others realise their own potential!

After 23 years of working within the West Mercia Police, his own advancements suddenly stalled. Having never had sick leave Pervez was now faced with the prospect of being seriously ill with kidney failure. At the beginning of 2012 despite struggling to continue with work and other commitments Pervez knew something was wrong and finally sought medical help.

The shocking discovery was that he was suffering from polycystic kidney disease. Despite this Pervez won the Quality People Award 2012 for outstanding contribution to West Mercia Police. A very proud moment indeed!

Pervez works with a number of charities and organisations such as Guide Dogs to the Blind Association and has become a spokesperson in the disabled community, using his skills learnt during his time in the police force to help others.

Alongside this Pervez is the UK’s first blind DJ to play entirely by memory – there is no end to his skills and talents.

Pervez’s story is a tale of inspiration and motivation, one not to be missed.

Chasing the Bean: The Inspirational Life Story of Pervez Hussain (2014)

The theme of the conference was rising to the challenge of being one of the six pathfinder trusts and using the new freedoms implicit in that status to assist us in doing a better job despite the organisational, financial and political uncertainties facing the probation service. "Pervez's presentation allowed the audience to make the links between his personal story and the organisational issues that we are facing in a very helpful way that avoided the didactic and made the challenges very real. We had a very positive response to the session, which also allowed us to draw lessons from a diversity scenario and employ the learning across the whole organisation, illustrating the secondary point that we wanted to make that managing diversity is not an 'add on' to the main business, but a part of the business with important lessons for the whole of the business. We are very grateful for the input and the amount of himself that Pervez invested in the session." The CEO of the National Probation Service made the above comments after Pervez addressed over 200 staff and board members at the first annual conference of the newly launched West Mercia Probation Trust.

“Be inspired to overcome obstacles and reach your full potential, Pervez kindly agreed to be our guest speaker at the annual celebration of Achievement for the Royal National College for the Blind. Pervez delivered a remarkable motivational speech lasting the ideal length of fifteen minutes. He engaged the audience of students’ parents and supporters and friends of the college from the outset. The speech had a clear structure and very relevant messages rooted in Pervez’s considerable experience. Thus it was authentic and sincere. Pervez used humour to good effect but did not let it distract from the important points he was making. There was much positive feedback from our college community following the event and students queued to speak to Pervez after the celebration. We felt fortunate in having the services of someone who spoke with meaning and empathy to our invited guests and students alike."

Sheila Tallon, The Royal National College for the Blind November 2015

Pervez gave a short talk on his life and experiences of living with a disability at the Mike Oborski No Barriers Awards 2010.  He was such a relaxed, informal and engaging speaker that the audience was rapt throughout his story. His amusing insights and ability to inspire anybody with an 'ability' whatever it may be, made him an excellent choice of speaker. In fact, when the presentations and ceremony were finished Pervez was the most popular topic of conversation on all of the tables I visited when chatting to the guests.  I would certainly recommend Pervez if you want to engage your audience and inspire them, whoever they are.

A few years ago I asked Pervez to speak at West Mercia Probation’s annual conference. He demonstrated to an audience of around 250 staff how the barriers to his success were overcome with determination, courage and above all humour, despite many operations related to his disability and the poor attitudes of employers. His speech was delivered with such grace and at times had his audience in fits of laughter. If you need a motivational speaker to inspire, then you need look no further as Pervez is your man. I would recommend him to anyone - and have done on several occasions

I have worked with Pervez on a number of projects over many years. We all face setbacks in life....some more than others. Pervez will share how he has tackled very tough life impacting challenges head on. With his great sense of humour and through his positive can do approach Pervez always promotes a message of living life to the full. If you are looking for a motivational speaker with a difference give him a call. He really is such an inspirational individual with a highly motivating message!