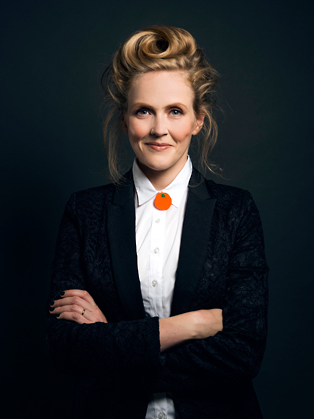 Pippa Evans is an award-winning musical performer, songwriter and improviser.

Pippa has performed on tour across the UK and internationally and has enjoyed West End residencies at the Lyric Theatre and The Other Palace. Pippa’s musical comedy skills can be heard in several series of Radio 4 series 15 minute musical and in guest appearances on Sorry I Haven’t A Clue, she has also performed original comedy songs as a series regular on Radio 4 institution The Now Show and on ITV’s Tonight at the Palladium. In September 2019, Pippa played the Narrator in the new musical Normality at The Other Palace.

Pippa recently worked as the dramaturg on 9 to 5: The Musical, which is currently playing at the Savoy Theatre and is also touring the UK. She was also commissioned to write an original song for The Jack Whitehall Christmas Special, performed by Jack as the show’s finale at the London Palladium. It dropped on Netflix in mid-December of 2019.

Pippa co-hosts The Showstopper! Podcast, interviewing and improvising with West End musical theatre performers and creative. Previous guests include John Owen-Jones, Dan Gillespie Sells, Kaisa Hammarlund, Mel Giedroyc and Obioma Ugoala. Pippa created and hosts Parts I’ll Never Play, a semi-regular live night at The Other Palace in which she chats to guests from the world of musical theatre about their careers and casting experiences before they take to the spotlight to sing their favourite song performed by a character they could never be cast as.

In August 2018, Pippa originated the role of Diana Purdy in the new comedy play Brexit at the Edinburgh Fringe Festival. Following a raft of 4 and 5 star reviews and a sold out run, Pippa reprised her role when the show transferred to the King’s Head Theatre. Pippa will also be seen in the second season of the critically acclaimed The End Of The F***ing World on Channel 4 and Netflix.

Pippa is a solo musical comedy performer who has taken six shows to the Edinburgh Fringe Festival both as herself and as her American singer-songwriter Loretta Maine.

In addition to securing a nomination for Best Newcomer at the Edinburgh Comedy Awards, her shows have been consistently praised for combining razor sharp writing and her mastery of ‘the art of crowd work, bringing unsheathed joy to a room’ (The List) with ‘comic talent and musical genuis’ (Edinburgh Evening News) whilst incorporating her skills as ‘a highly talented improviser’ (The Guardian) and ‘a gifted comic actress’ (The Scotsman).

Pippa has performed comedy across the world, including the prestigious invitation-only Montreal Just For Laughs Festival and the Melbourne Comedy Festival. Pippa developed and leads a course entitled Improv Your Life in which she demonstrates how improve can be applied to everyday life, drawing on her experience of working with and performing alongside improve groups around the world.