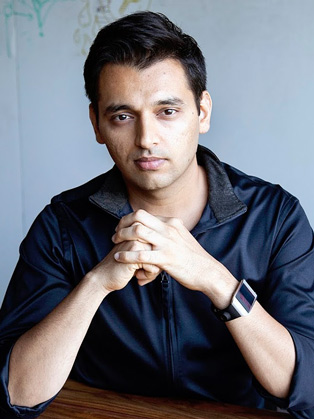 Pranav Mistry is a renowned scientist and inventor.

Pranav Mistry’s contribution to the fields such as Wearable Computing, Augmented Reality and Gestural Computing puts him in the elite list of pioneers and inventors that shape the future of digital world.

Inventor, Designer and Engineer from heart, Pranav Mistry is best known for his inventions of SixthSense and Samsung Gear. In 2009, Pranav introduced SixthSense – wearable gestural computing technology to the world during TED2009 talk. Since then, Pranav is one of the most watched TED speaker (more than 20 million views) on TED. Among some of his other work, Pranav has invented Mouseless – an invisible computer mouse; SPARSH– a novel way to copy-paste data between digital devices; Quickies – intelligent sticky notes that can be searched, located and can send reminders and messages; Blinkbot - a gaze and blink controlled robot; a pen that can draw in 3D; and a public map that can act as Google of physical world and many more. Pranav holds several patents and has published many research papers in various academic conferences. In September 2013, Pranav introduced Samsung Gear smartwatch during the IFA in Germany. Samsung Gear is considered the pioneer in wearable computing devices. Pranav’s research field include Wearable Computing, Augmented Reality, Ubiquitous Computing, Gestural Interaction, Artificial Intelligence, Machine Vision, Collective Intelligence and Robotics.

For his contribution to the advancement of digital computing technologies, Pranav has been honored by many prestigious international awards. He was awarded the 2009 ‘Inventor of the Year’ Award by Popular Science. He was also named to the MIT TR35 as one of the top 35 innovators in the world under the age of 35. In 2010, he was named to Creativity 50 – the list of top 50 creative people in world. Mistry has been listed as one of the 15 Asian Scientists to Watch by Asian Scientist Magazine. Recently, GQ India listed Pranav as one of the most powerful Digital Indians and was named among the 37 Indians of Tomorrow by India Today.  Mistry has been called "one of ten, best inventors in the world right now" by Chris Anderson. World Economic Forum honored Mistry as one of the Young Global Leader 2013. Media across the world has interviewed and covered Pranav’s work.