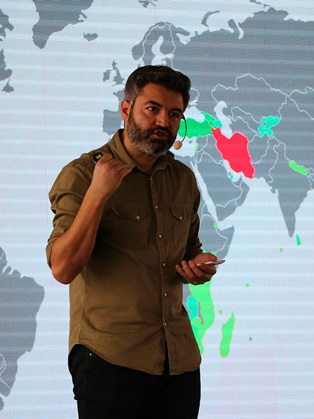 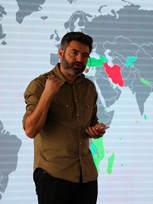 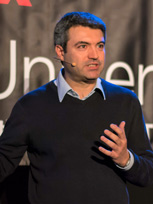 Listed amongst the world’s top 20 most seasoned travellers, Reza Pakravan is an explorer, filmmaker and author. His documentaries and books combine epic journeys with social and environmental issues, and they have taken him to some of the most beautiful, dangerous and remote regions of the world.

British-Iranian filmmaker Reza Pakravan transformed himself from a City worker on a six-figure salary to a global explorer-adventurer (winning a Guinness World Record in the process). He explores the fundamentals of the adventuring mindset and how taking managed risks can enhance your working life and personal growth.

Reza focuses on the true value and unforeseen opportunities that often come from taking risks and adopting the attitude of an adventurer-entrepreneur. He explains how he uses lessons from his travels in his everyday business life, as he now produces and presents successful television series which have sold around the world.

He talks about the fundamentals of thinking and behaving that enabled him to overcome self-doubt, adversity and conflict by making quick and confident decisions, and following through on his plans.

Reza has led various expeditions in some of the most dangerous parts of the world, which generally involve prolonged periods of travel. He analyses similarities between extreme expeditions and the real-life challenges faced by businesses and individuals: how to respond to novelty, how to adapt to change and how to work as a team in resolving conflicts and difficult situations to reach a common goal.

He is a fellow of the Royal Geographical Society and has received a prestigious Lloyd’s Charity Award for his work building six schools in Madagascar. Reza is an engaging speaker and has spoken all over the world most notably at three TED conferences.

All topics are backed by real situations with a story and lessons adaptable to every audience: whether motivating businesses or entertaining festival crowds.

Reza is a charismatic speaker who builds a strong connection with his audience from the instant he steps on the stage. His talk was a true inspiration.

A real story of courage and inspiration. One of the greatest motivational speeches we have ever heard.

Reza brings a perfect balance of passion and razor-sharp delivery. He had the Yestival audience hooked after a thoughtful, powerful speech - it's not often you can be sitting in Sussex and then be instantly transported to the Amazon jungle.