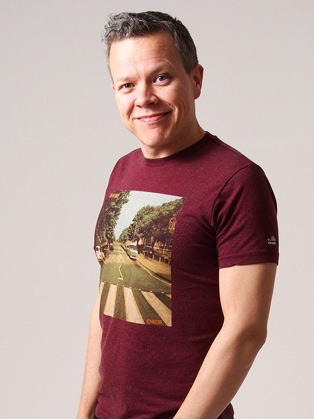 Rob Deering is an award-winning guitar-playing comedian. Over the years Rob has cemented his reputation as one of the country's finest stand ups, taking six solo shows to the Edinburgh Festival, headlining all the major comedy clubs throughout Britain. Combining jokes, a cheeky grim and some impressive guitar and singing skills, Rob wins over audiences of any background. Using a battery of effects pedals, Rob creates whole songs live on stage to help him look at how ludicrous rock music can be, the worst song lyrics ever written, and highlight wildly inappropriate songs to accompany certain moments in life. He also points out how many performers sing with bread in their mouths and the similarity of songs previously consider worlds apart - such as Nirvana's Smells Like Teen Spirit and Abba's Dancing Queen.

Rob Deering is a comedian and presenter. He is a former BBC New Comedy Award finalist and regularly hosts The Comedy Club (BBC Radio 4 Extra). He has appeared on Pointless Celebrities (BBC One), Celebrity Eggheads (BBC Two) and Celebrity Mastermind (BBC One). He also won a special comedian’s edition of The Weakest Link – Rob is the only person ever to have won without getting a question wrong!

Rob is a regular contributor to Steve Lamacq’s Roundtable (BBC Radio 6 Music). His other credits include Comedy Rocks With Jason Manford (ITV) and Celebrity Juice (ITV2) as well as co-hosting Out To Lunch (BBC Radio 2) with Russell Kane.

Rob has toured the UK with his critically-acclaimed solo shows. He is also a regular performer at the Edinburgh Fringe as well as appearing at the Udderbelly Festival (on London’s Southbank), Machfest, V Festival, Towersey Festival, Kendal Calling, Green Man Festival, Camp Bestival and Latitude. Also, his late-night music comedy pop quiz Beat This is a festival institution. Rob is in high demand both as a corporate performer and as a headliner at comedy clubs around the country and abroad.

Rob is a prolific runner – he has completed multiple marathons and has a regular podcast, Running Commentary, with fellow comedian Paul Tonkinson in which they talk about life, and running, as well as interviewing celebrities and other interesting characters…all whilst running.