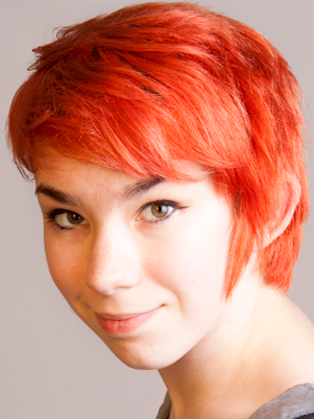 EMMY winning documentary 'My Autism and Me' although this may be surpassed by her TEDMED speech delivered in Washington USA.

BBC Presenter, illustrator and public speaker, Rosie King has achieved great things at the tender age of 16. She diagnosed her own Asperger's Syndrome at the age of nine (a diagnosis that was later confirmed by specialists) and dedicated her considerable talents to raising positive awareness about autism. With a younger brother and sister severely affected by the condition, this has always been a subject close to Rosie's heart. She is a young ambassador for the National Autistic Society, and has worked closely with professionals to improve the quality of education for young people with additional needs in mainstream school. After speaking about her condition and the way that it effects her at the TEDMED convention in Washington DC 2014, Rosie received a standing ovation.

When she was nine years old, doctors confirmed Rosie King’s self-diagnosis of Asperger’s syndrome. With two younger siblings severely affected by autism, from a young age, Rosie had a burning desire to help make the world a more tolerant place for people with autism. She found the opportunity to do so when her family was invited to do a local news segment on her mother’s children’s books that featured Rosie’s illustrations. Her lack of inhibition made her a natural presenter, and she was asked to host BBC Newsround’s special program “My Autism and Me,” bringing her a much wider audience and an Emmy Kid’s Award. Now at the ripe old age of 16, she’s an Emmy Award-winning spokesperson and educator who is helping to make the world a more tolerant place for people with autism. Rosie continues to raise awareness about autism, and is working towards her goal of becoming a professional actress and storyteller.

Rosie is currently reading Creative Writing at University and is writing for the BBC. She has also been working with Paper Owl Films on a new show called Pablo, out September 2017. Rosie is a creator, writer and voice-actor for the show which helps very young children understand Autism. All members of the cast are also on the autistic spectrum and is set for a second series.